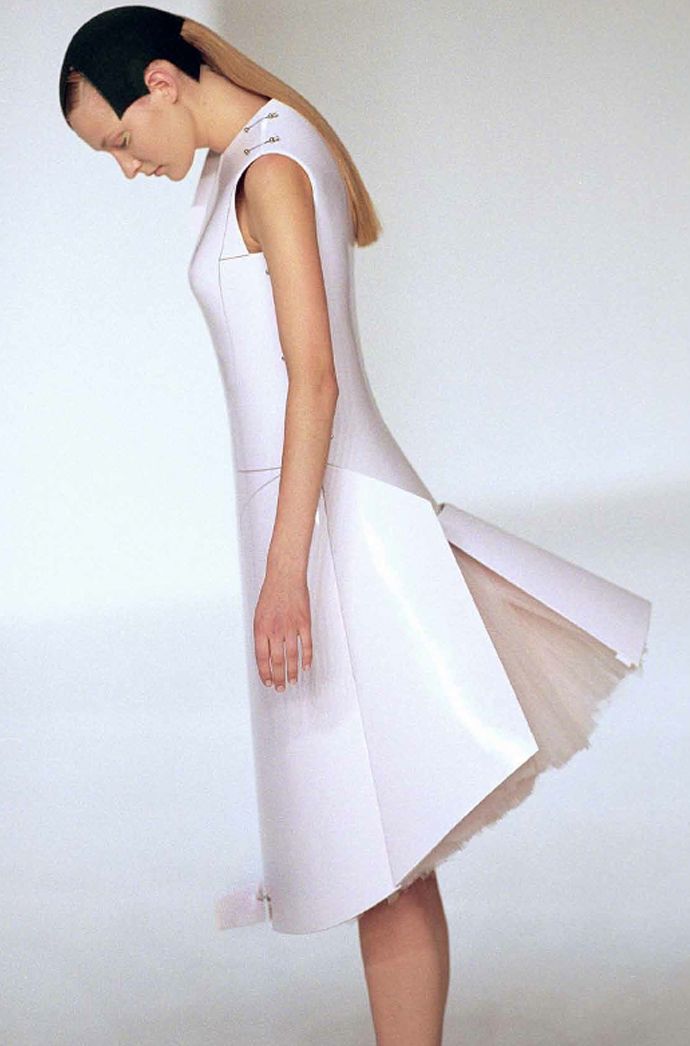 Before Minus Now S/S 2000 © Christopher Moore

Viewed from the front and at a distance, the dress looks somewhat conventional. A deceptively body-con silhouette and halter-neck belie the innovation lurking in the garment’s back. Protrusions distort the natural line of the silhouette as though some great force has languidly pulled away handfuls of the back. Where these organic peaks return to the body, they flow seamlessly around the wearer’s profile, this time closer to the body, mimicking the drape of fabric and the folds of crushed metal. The dress is moulded from latex and finished with a liquid-like shine. It commands attention. Yet, it is not a dress to be worn off the catwalk; it is a dress to be displayed in a gallery. A finale design from the S/S09 collection Inertia, it is a visual analysis of modern society’s unsustainable obsession with speed by one of fashion’s most avant-garde names. Welcome to the world of Hussein Chalayan, a commercial designer with a conceptual approach.

In terms of traditional folklore, Chalayan would be both the sage and the explorer. Born in Nicosia in 1970, Chalayan is a Turkish Cypriot whose career began in London soon after his degree at Central Saint Martins in 1993. His graduation collection was the seed from which his fate could be read; three months prior to Tangent Flows, he buried his dresses in his garden, retrieving them once oxidation had transformed the fabrics. This commitment to vision and innovative approach continues to result in collections that defy accepted notions of what constitutes clothing.

From 5th July – 13th November, Fashion Narratives recounts the past 17 years of Chalayan’s career. Set in the Museum of Decorative Arts (Les Arts Decoratifs) in Paris, this is the tale of a designer who puts pen to body, stitches words into garments and illustrates the power of fashion as a medium for provoking thought. The chapters of Art and Fashion merge in his creations as concepts are explored through various mediums simultaneously: the output of one idea may be in the form of clothing, fashion shows, installations, and projections. Shown side by side, these reveal Chalayan’s unique method and allow viewers to witness how he, more so than other contemporary designers, has both chipped away at the prescribed boundaries of fashion and documented the social, political and economic issues of his time.

Take Inertia as an example: using the visual language of car crashes – crumpled number plates, ruined fenders and pummelled metal – Chalayan considers both the speed of our lives and the resulting crash. The dress described symbolises both cause and effect. It is just one of the many spellbinding chapters in Chalayan’s work which can be explored this summer. Presented across two floors, the exhibition displays are divided thematically. Wander through Chalayan’s mind on the first floor and discover the collections that explore political, cultural, religious, geographical and technical boundaries. One floor up takes you deeper into the concepts he has considered – movement and displacement, migration and speed, interpretations of time and space.

If the distance to Paris is too far, then take comfort in the Rizzoli publication which supports the exhibition; published in September 2011, Hussein Chalayan features Chalayan’s complete body of fashion and creative work, allowing you to return to his designs whenever the moment takes you. What better way to revitalise your spirits and rekindle your inspiration, than by exploring the mind of one of this and last century’s greatest designers through the pages of an entrancing book and the exciting displays of a Parisian museum. 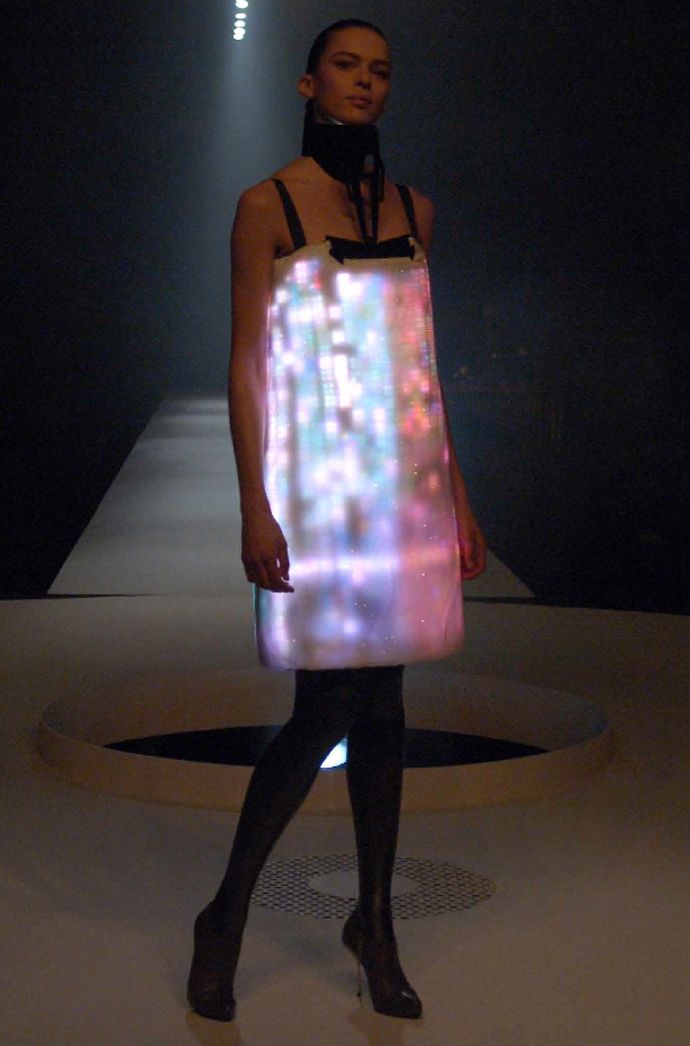 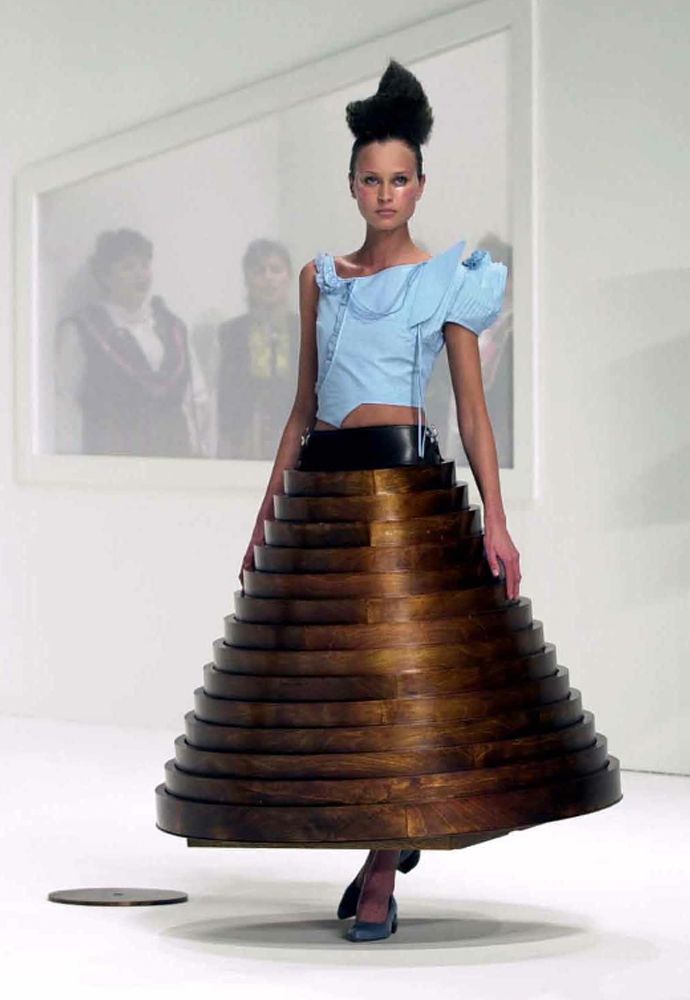 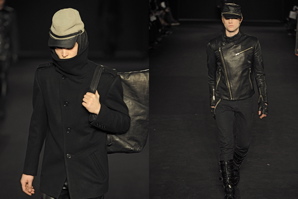 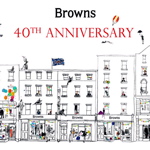 Joan Burstein's Browns, the darling of London’s shopping emporia, turns forty this month and invites the whole city to celebrate 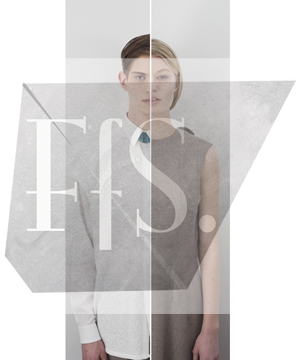