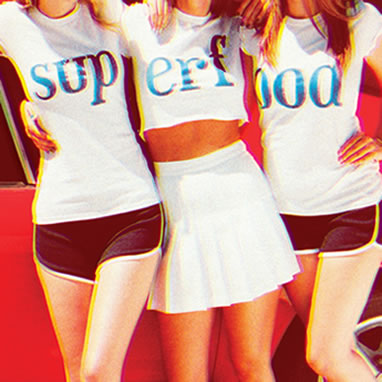 Superfood are no strangers to hosting raucous and outrageous gigs. In fact, last year they managed to, quite literally, bring the roof down. The Birmingham four piece (Dominic Ganderton on vocals and guitar, Emily Baker on bass, Ryan Malcolm on guitar and Carl Griffin on drums) earned their stripes with their debut album Don’t Say That released last November on Infectious Records. Forever on the endless pursuit of fun, Superfood had everyone dancing to their nonsensical, peculiar but fantastic lyrics. Superfood provided serious fun-loving vibes and aural nutrition by the bucketload at their biggest ever headline gig at Heaven.

The support acts were the perfect way to drum up excitement. The night started off with Black Honey, which had strong bass lines, good vocals and a lead who was the perfect mix of Debbie Harry and Courtney Love (both physically and musically). Yak followed, and whilst the vocalist did get a bit carried away, the keys and drums were enough to get the crowd jumping with excitement ready for the main act.

With trickles of escapism and odd daydreams flitting through Superfood’s set, the gig proved they earned their nomination for NME’s Best New Band. With originality and ingenuity racing through their Britpop-revivalist tracks, they kept their audience’s raptured attention. The hard-core fans were there in force, forming swirling mosh pits to It’s Good To See You and singing merrily along to Volt Café’s favourite track Moodbomb and electric crowd-pleaser Right On Satellite.

The encore of Lily For Your Pad and Superfood involved twangy guitars and hair-flicking and stage-diving from Baker. Overall Superfood provided excellent entertainment, cheeky chat and lots of grins from frontman Ganderton and stirring songs that had the crowd whirring.

Set List:
You Can Believe
Bubbles
Pallasades
Melting
Like A Daisy
Don’t Say That
It’s Good To See You
Houses on the Plain
Moodbomb
Right On Satellite
TV
Lily For Your Pad
Superfood

Superfood’s debut album Don’t Say That is out now on Infectious Records. 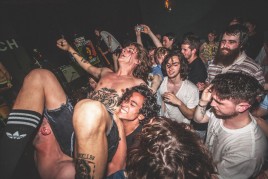