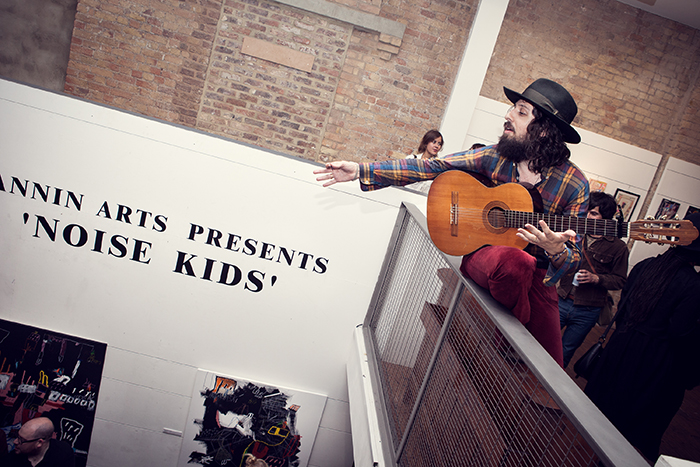 Noise Kids, an exhibition of the loud art of four musicians, was in a working process when I had the chance to talk to the two of them: Adam Green and Fionn Regan.

Green is a songwriter from the US who has released seven albums, directed and acted in the film “The Wrong Ferrari”, which was shot completely on an iPhone, as well as staging many visual art exhibitions.
Regan is an Irish folk songwriter, he released his first album in 2006, which was nominated for the Mercury music prize and has released a further three since. 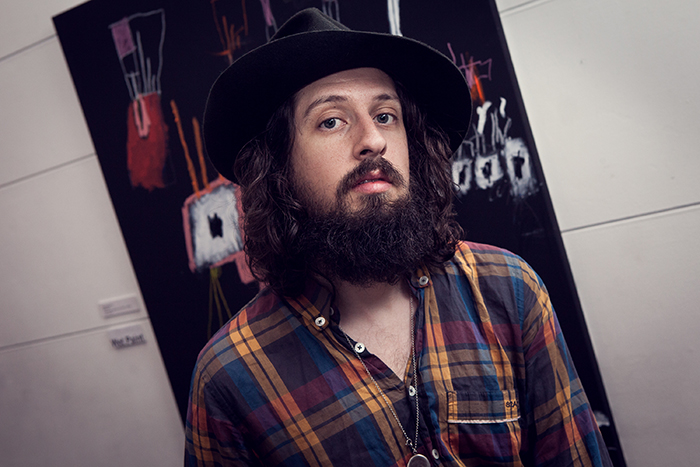 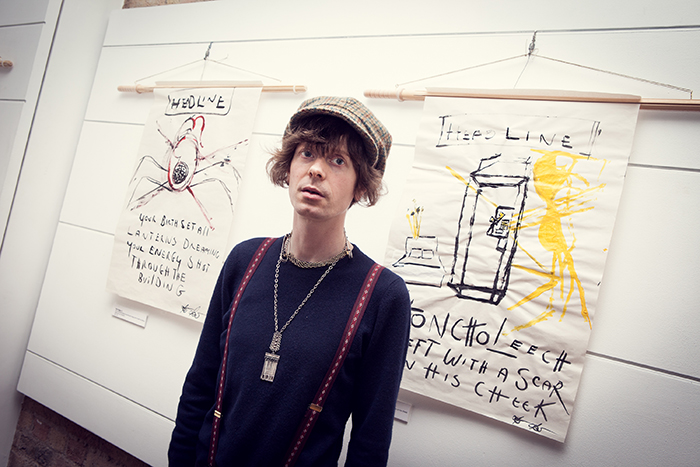 We watched Green’s short film called “Faggots Making Music”, which is a hilarious piece about making fun of the people who try to make up new music genres that don’t make sense anymore.
Then we sat down to have a chat about their art, music and the connection between the two.


Volt Café: First off, what is the inspiration for your music and art?

Fionn Regan: Mostly, things from real life. You cannot pretend that you have a life, so it is always reflected in your work. So I would say my memory, my autobiography.

VC: Would you say that the inspiration for the music and art comes from the same source?

FR: Sometimes you can express a feeling better with painting, sometimes with a sound but sometimes it has to be connected. They’re both equal but separate at the same time.

Adam Green: A thing for this particular exhibit is that it is pretty abstract.
I was originally into noise bands when I was a kid, you know like experimental noise bands? So basically I would get stoned and record music in my parents’ cloak closet. And you know there is a certain way of hearing sounds that has affected me. In younger age having a psychedelic experience and hear sounds, it sounded really stringy and furry, there was synaesthesia attached to it. I remember hearing sounds and seeing them, so I think for this show I was trying to make my own version of biomorphic noise that is how I saw it when I was younger.
I am also more interested in newer painters these days, like Eddie Martinez and Andre Butzer.
The Noise show makes sense to me, I think that George Annin (the curator) found the commonality between everyone: people who do music and art. All the artists are sort of approaching these canvases from a similar place.

VC: So would you say that the main idea of the show is to translate the noise into art?

FR: I think it’s interesting for me that when I paint; the main production is in front of me. It’s a kind of an action, it’s done. Whereas with music there are so many different ways that it could go. The process is longer because you can start with a demo and then work it into the final song.
With the paint I can just say something. It’s almost like punk, I can say something straight away. I don’t have to think anything after that. It’s like a nail upon the wall. So it’s way more immediate in that way. I think it’s the same energy dealt in a different, quicker way.

AG: I wouldn’t say that these paintings are songs. That’s not how I think of it. There is a feeling that sound gives you when you make it. You know like the feeling when you make music and hear it? So I think that people can get confused. You see a picture of a sound wave, that’s not exactly how the sound feels like, its how it looks like. So in a way this show is more about how the sound feels like. When I make a line with an expressive feeling, it feels like sound, especially when there’s nothing in mind that I’m drawing.

VC: If you would describe your work with three words, what could it be?

AG: (after thinking) Ironic Faggot Noise
(After all of us laughing, Regan is still thinking)

FR: I don’t know, seems more like an Expressionistic Punk

FR: Yeah, I’m sure there’s a better, well-known name for it

AG: You know what, these pieces of Regan are based on specific memories; these pieces are provoked from childhood memories. Like they’re headlines, but they’re just headlines of his life.

FR: Yes, all the paintings I’ve made are like an edition. It’s like a newspaper of my own spirit, of my own memory. Some of them are just things that made me laugh or just the things that would go through my head, the words that just arrive in my memory. So the whole thing is a collection, the first edition of my thoughts. What I plan to do is to keep sort of documenting the things that come along. I was going to do 100 editions but that would take me ages. So that’s the first edition from now on. You find me making more headline editions.

AG: I feel like drawing is in this kind of a way a wellspring, a cluster of information that is hidden in your spirit. It’s almost like all this raw materials that haven’t been communicated into language. I really think it looks like me in the paintings. I think if you saw them far away you would think that Adam painted it. I think it looks like my soul is in it. There are few pieces on some of my albums that are more like sound experiments; they probably would accompany these pieces pretty well. Even the silly pieces like “Faggots making music” film, you can feel it along these lines. I think once a human hand is involved the accident is not there, we are making all kinds of decisions, there’s nothing random about it.


VC: When did you start taking art in a more serious way?

FR: Well this is the first time I am having an exhibition. But at the same time I have been painting as long as I have been writing songs. The sound writing seemed to take off first. No matter what you’re dealing with, there’s a certain joy with it and certain spirit that comes through. It’s the same feeling that I get when I finish painting and it came together, as well as when I create a song. So in a way I have been dealing with both as long.

AG: I like that it’s very personal. You can just paint or draw, it’s private for me. You get a lot of satisfaction out of it.

FR: I’ve seen a book in the library of all these neo-expressionism painters, like Baselitz. I started looking at them and I just couldn’t believe it. The mad stuff that they did opened up the room! I felt like they are an ancient family or something, it gave me more confidence to do what I am doing.

AG: I think we could definitely talk about someone like Baselitz when we talk about noise. You can imagine the sound come out of his paintings. I mean it must have been really loud just to make them!
Oh but I had to tell you about my exhibitions, I have done them in New York, Rome, Zurich and Sweden. So this is the first time for me to show my paintings and drawings in London.

VC: How is this exhibition different from your previous ones?

AG: It’s a continuation of my previous exhibitions. But my last show was based on the world of different shapes; it was made out of different cartoon characters. But in this one you can still see the resemblance of it, you can see the shapes of big birds eyes or Garfield’s cheeks but they are just unrecognisable now. This exhibition is just a bit more personal.


VC: Talking about your music, Adam, you have been described as anti folk. What would you say anti folk is for you?

AG: Well, the anti folk thing’s more of a community of songwriters that is centred in New York. It’s based around an open mic situation, that’s where I got started. I think of myself as part of anti folk community, I really like those people. It’s not really a musical style, it’s more the people. It’s a really cool thing because the currency is the song writing. It’s like an artist community.

VC: And Fionn, how would you describe your music?

FR: It’s the same thing as my art, it’s a way of connecting, documenting the journey as I go along. That’s the massive privilege of being able to write a song, somehow tell the story though the lens of your vision. I am a songwriter.

VC: Finally, since Volt is a fashion magazine, I would like to know what is your relationship with fashion?

FR: I don’t think I have any involvement with trend really. I am into clothes, the individualist expression and the way people dress. Clothes are in a way an aura, people try to dress like what their aura would look like. That’s the way I see it. I suppose fashion is the same as writing a song, it can go off your hand like a firework into the wrong direction. But I like to see how people look and express themselves.

AG: I had these pants made. (showing red velvet bell bottoms)

FR: And I made this jewellery, sort of. (holding up chains connected with safety pins)

FR: I like to get something and cut a bit of it off, make sleeves a bit shorter, make it my own. I also have loads of hats and glasses.

AG: I don’t like the direction the menswear is going right now. It’s really conservative. I like my own kind of style, I like that I could stop the traffic by just walking by.

FR: I think fashion creeps into music in a way that it’s all about being true to yourself and doing what feels individual and comfortable to you. 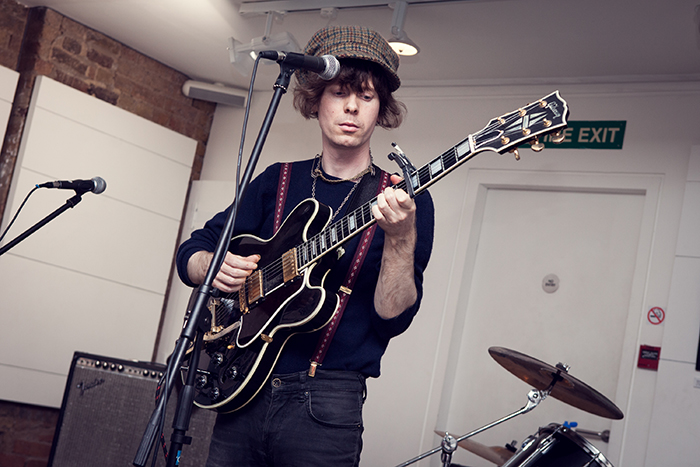 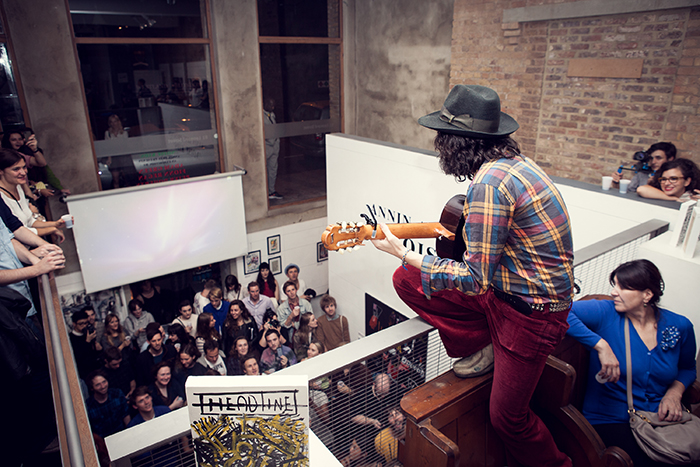 The launch for the show was the day after, where the artists performed their songs. The room in working process had transformed into a place full of people, who all got to experience the art and the live music, while the two accompanied each other so well.