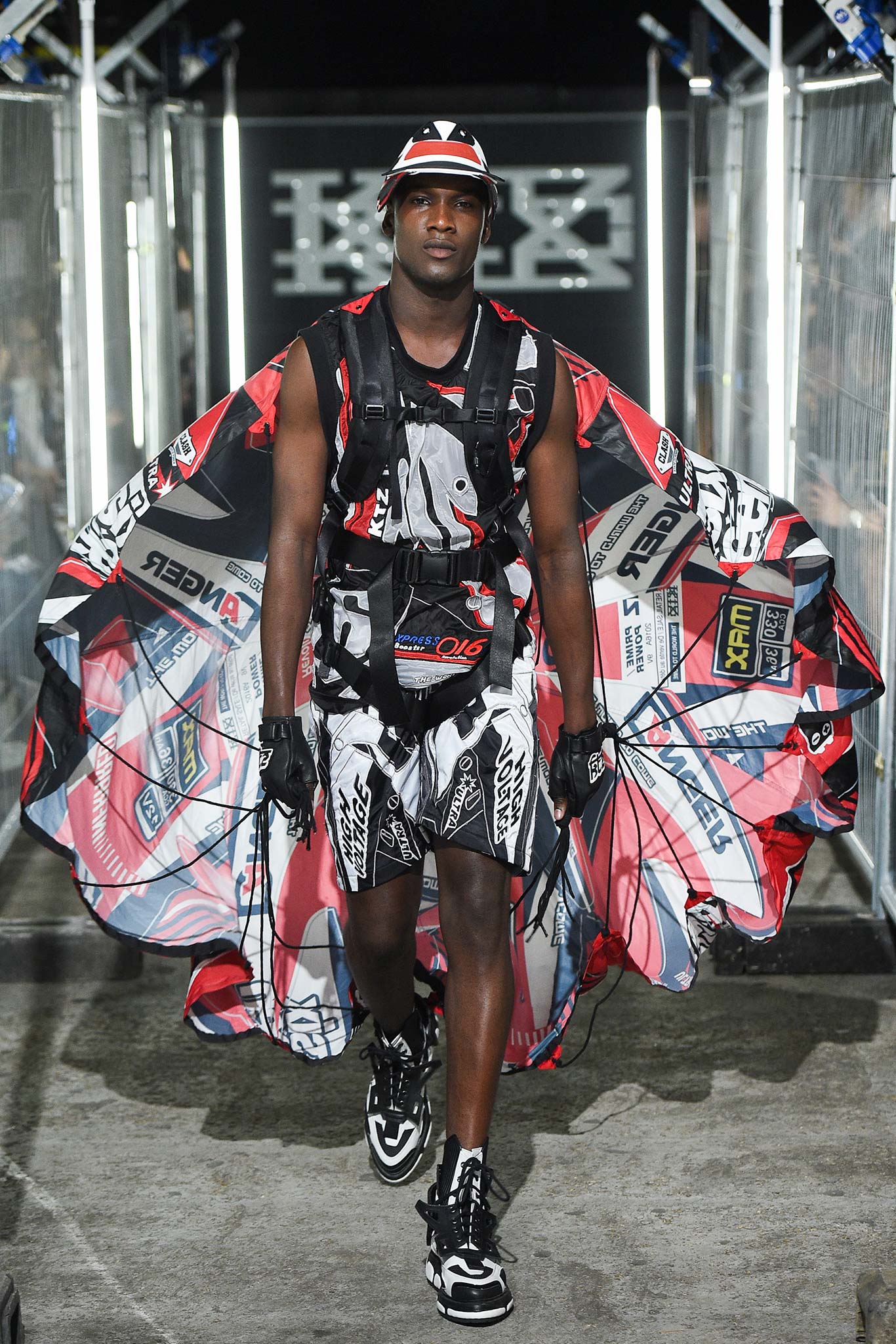 In its fifth year London Collections:Men has grown and expanded from initially a daylong add-on at the end of London Fashion Week, then to three days and this year has become a four day event showcasing the best talent the city has to offer.

China and Chinese culture has come to the fore thanks to the recent Metropolitan Museum in New York exhibition entitled China: Through The Looking Glass. This Chinese influence appeared in the works of Astrid Andersen, Alexander McQueen and Craig Green. 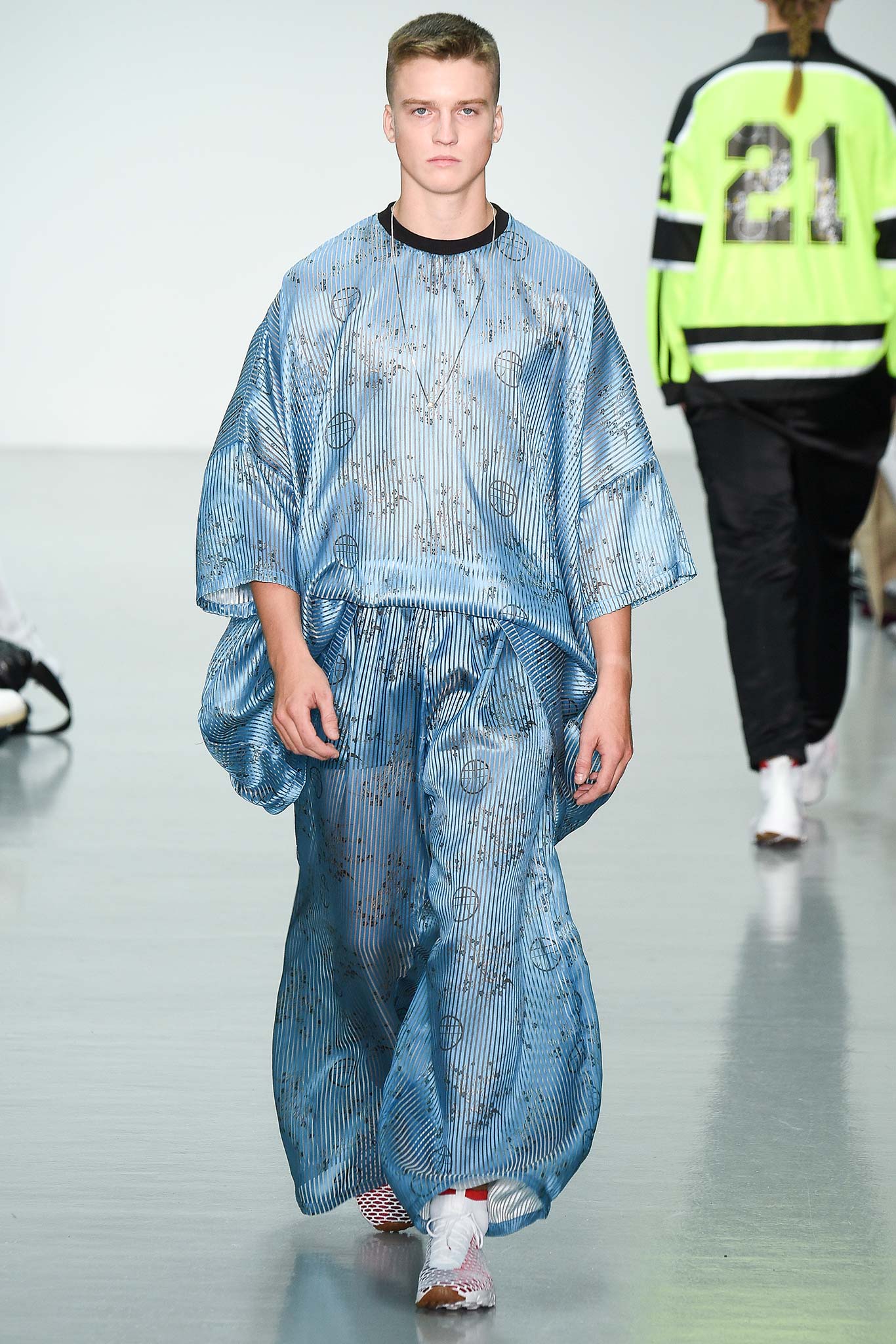 Andersen, who recently went on a trip to China to showcase her bespoke fur collection, translated the experience of her trip in looks that featured lurid metallic lavender and acid, sour greens. One look featured a luxurious striped silk oversized t-shirt and wide legged trouser co-ord with cherry blossom print detailing. This was a gradual step in the evolution of a brand known for its signature oversized basketball t-shirt with blown up crest. 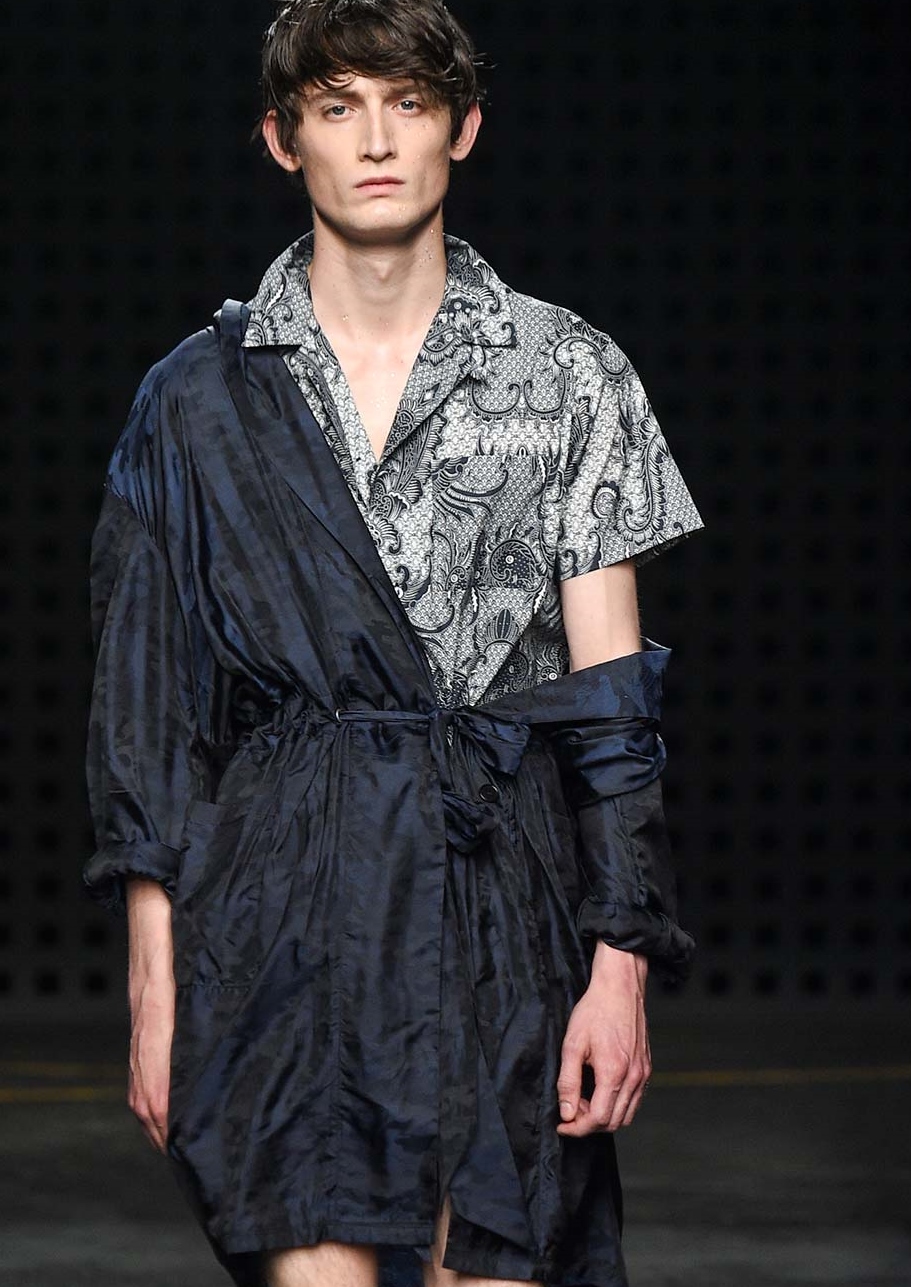 Kimono jackets were the outerwear piece of choice at JW Anderson, James Long and Craig Green. James Long presented his kimono jackets cinched at the model’s waist with one shoulder draped while the other hung away from the body, adding movement and fragility to the look. While at Craig Green, the darling of the London fashion scene, who has achieved worldwide critical praise only three years after graduating from Central Saint Martins and whose work was displayed as part of the Metropolitan Museum exhibition, also turned his eye to China. 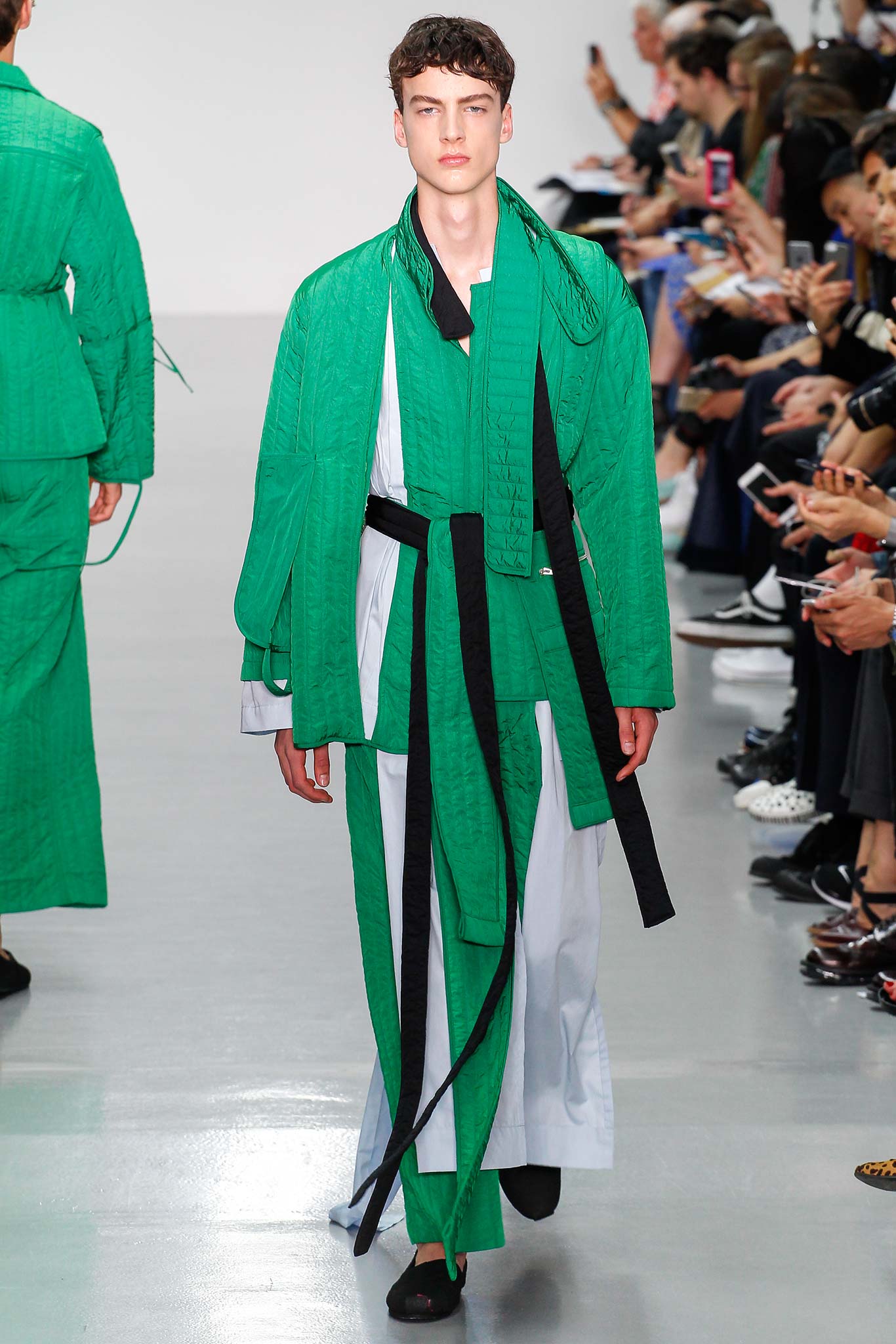 Green’s kimono jackets had more functionality and utilitarian purpose. In a primary colour palette of orange, blue, yellow and green, these kimonos made out of protective, quilted fabrics produced a rigid and stoic mode. Green’s clothes are just clothes for wear but also made for a purpose.

With MAN celebrating its 10th anniversary having propelled and launched the careers of designers such as Craig Green, Astrid Andersen, Kim Jones and JW Anderson to name a few it, seemed apt that a key trend for SS16 saw designers go back to their beginnings, redefining their silhouette and what they stand for. 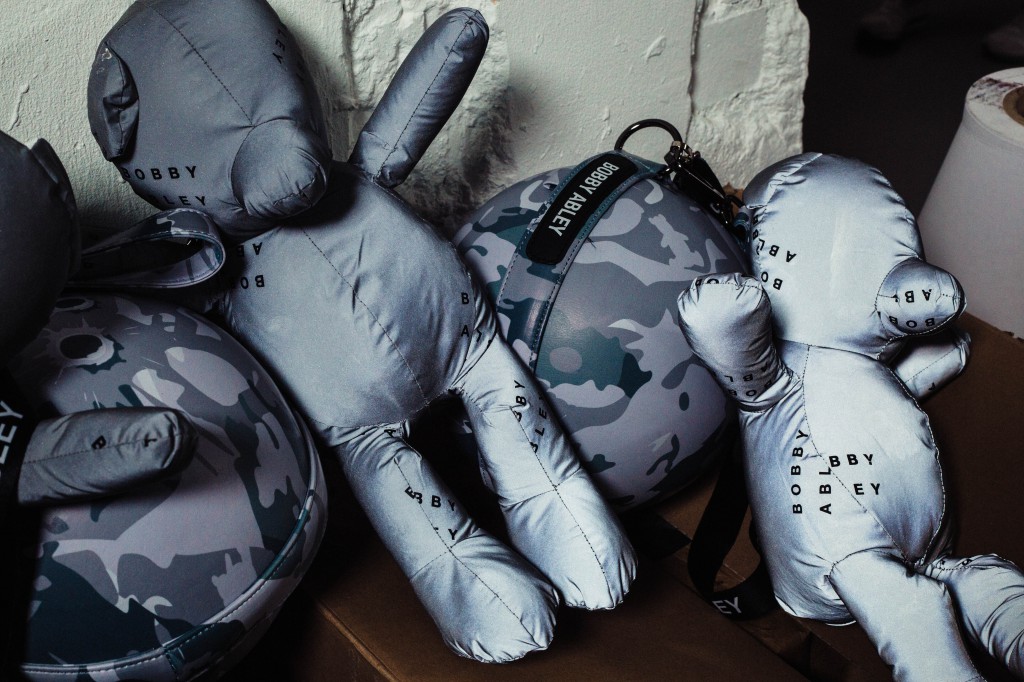 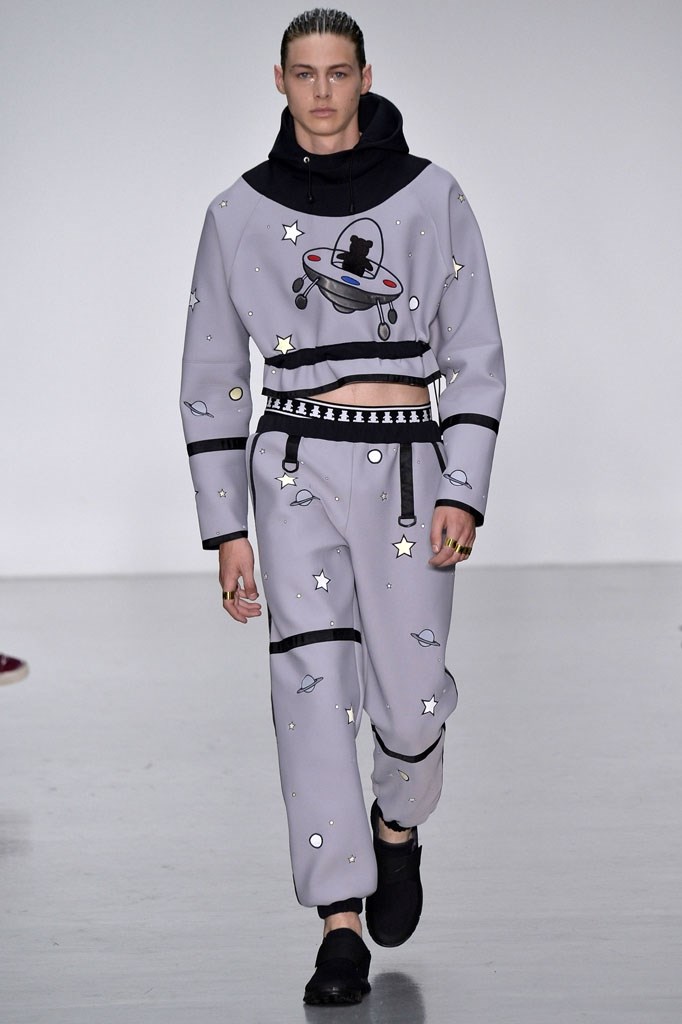 This time last year Bobby Abley broke the internet when he set Instagram and Twitter alight with sweatshirts featuring Ursula, Sebastian and Flounder from The Little Mermaid. For SS16 Abley referenced the intergalactic, starry graphics and motifs and sports/streetwear aesthetic of his first collection intertwined with a tongue-in-cheek nod to Star Wars. One look – a clinical white neoprene jumper featured the facial outline of a storm trooper in black PVC trim while another look in earthy brown mohair had the eyes, nose and mouth of an animated Chewbacca imprinted upon it. 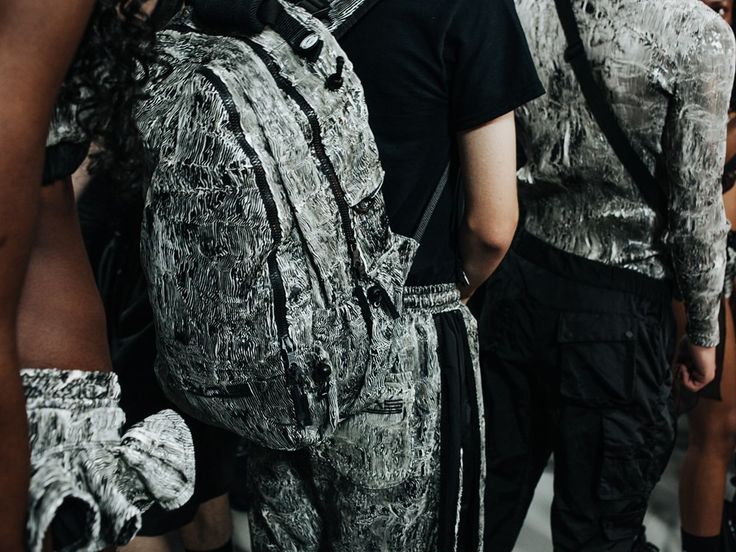 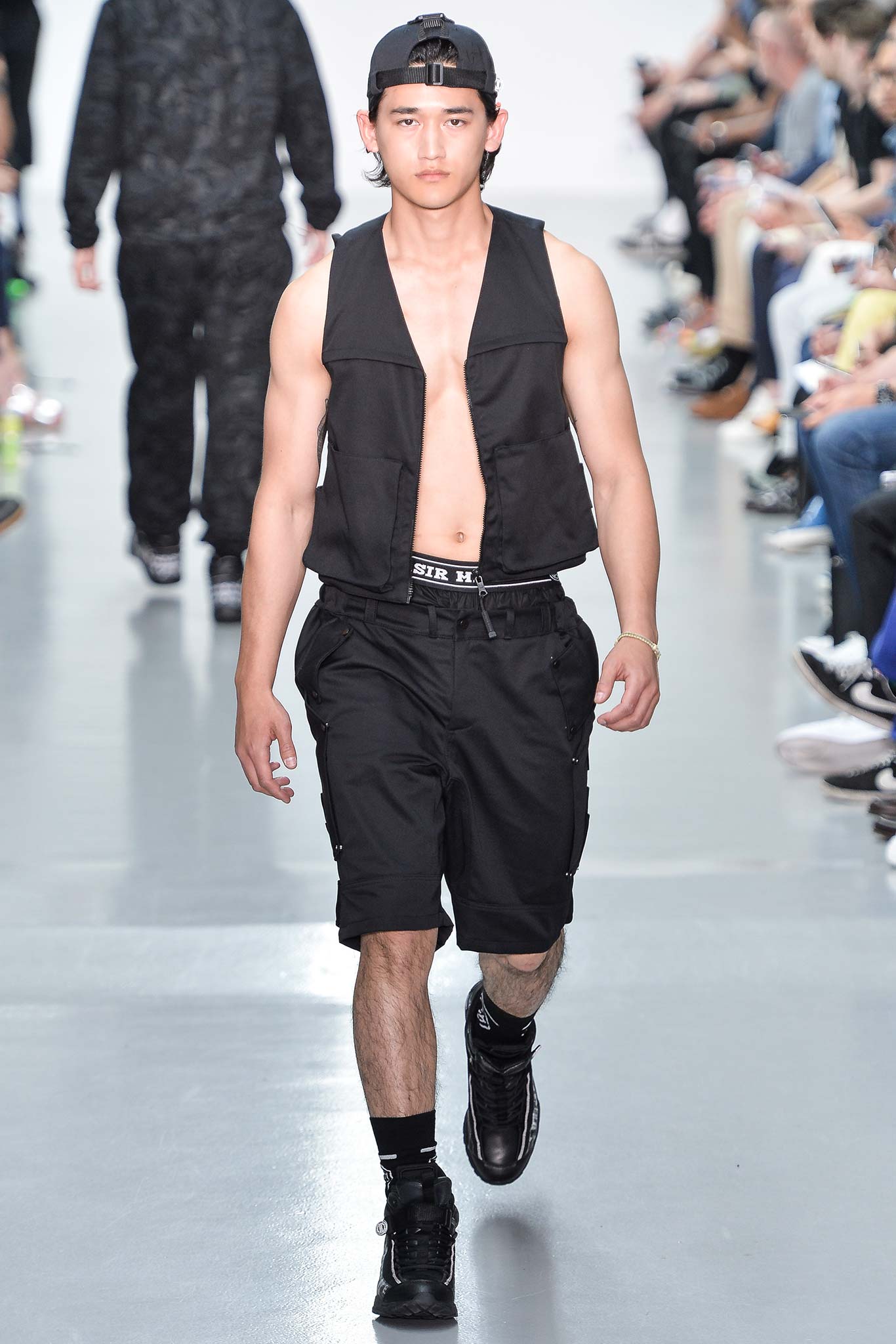 Over at Nasir Mazhar he presented a summer collection mainly in a colour palette of mournful, funereal black. It was Mazhar ‘pushing restart’ and the ending of a chapter. After being shortlisted for the LVMH Award this year, a sense of maturity and growth was evident in his work. Gone were the gold jacquards on his namesake logo and replaced with discreet and tasteful logo again in black. The fabrications and techniques were elevated as well. However what was apparent at Nasir and many other shows was the burst of energy, control and tension that played out. 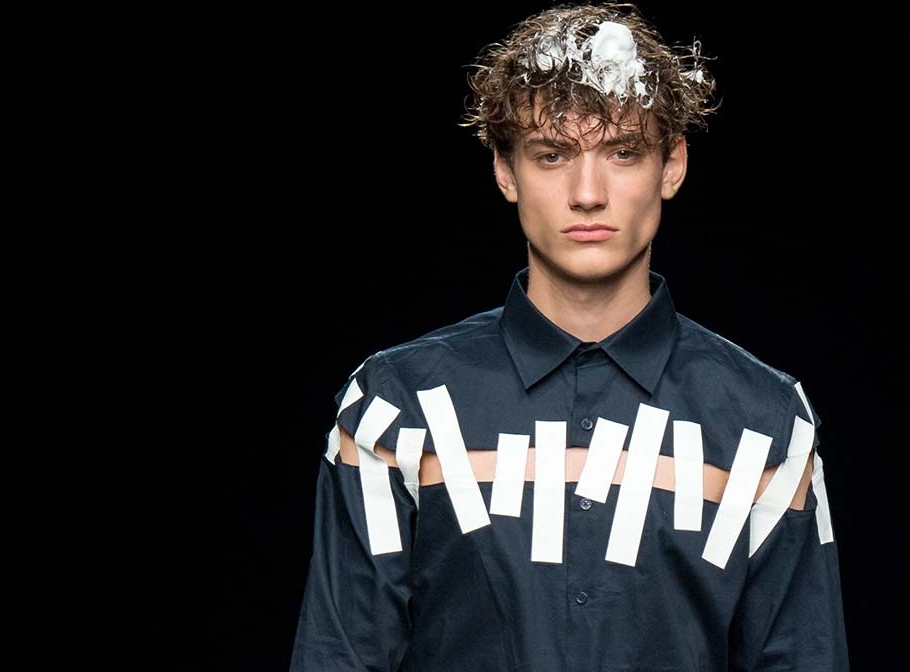 At Christopher Shannon that concept came in the form of black and white mesh tailored, sportswear bombers and jackets with large industrial zips; unzipped to expose the body. Gone were the eponymous CHRISTOPHER SHANNON logo looks that always opened his shows; in their place, a sweatshirt and track pant look, horizontally slashed at the neckline and knee, then held together with strips of white and black sports tape. 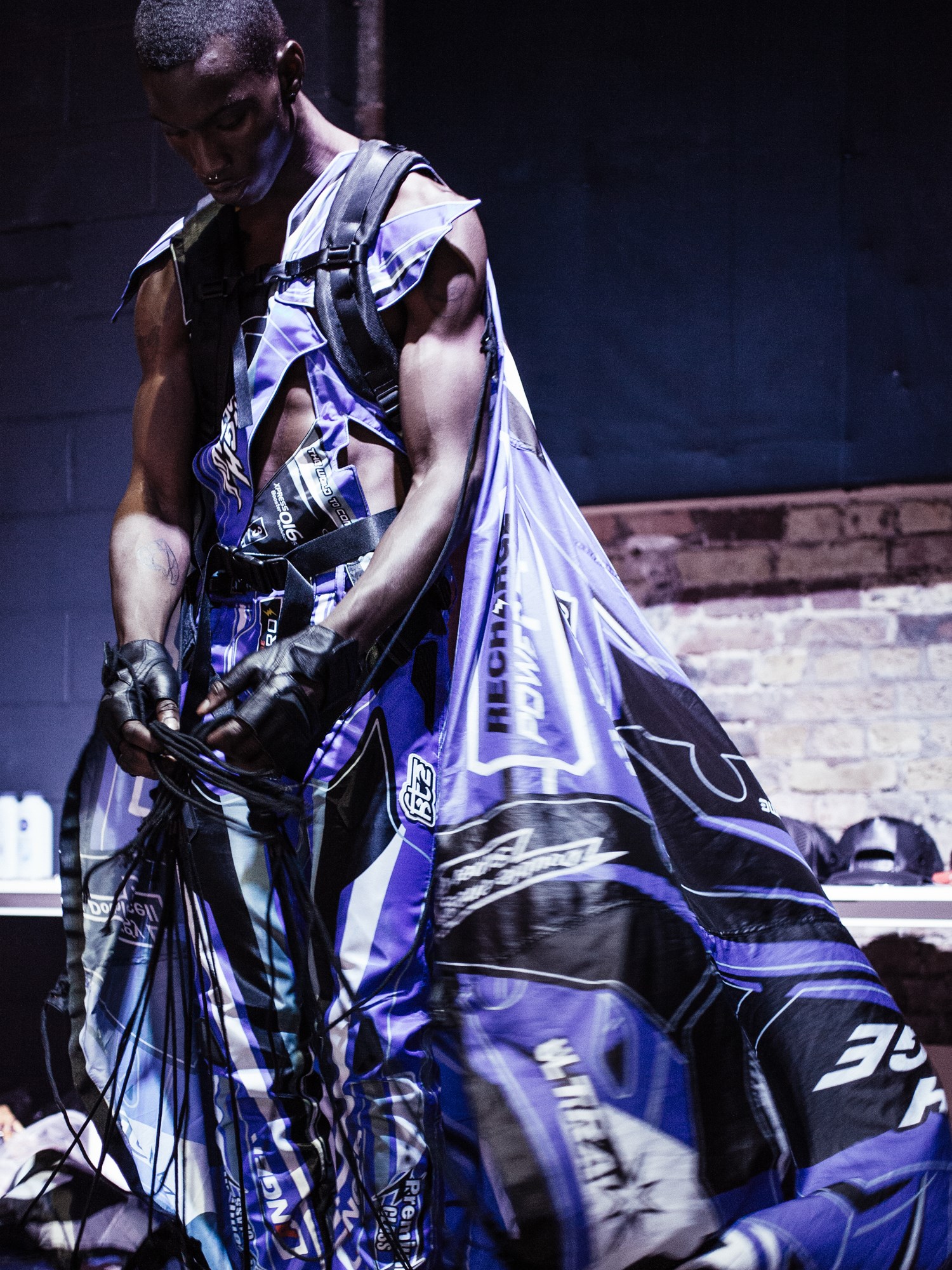 KTZ presented high-octane energy with a show that took place at a warehouse venue where the gay club night XXL is held. The set placed attendees behind a fenced off wall where lights and silver strips dangled on the inside created a savage playground for graphic clothing. The opening shirt and shorts looks featured horizontal and vertical coloured lines on flesh coloured plastic. This presented a sense of speed and pace as models marched and raced past in the blink of an eye over a heavy high-NRG soundtrack. Motocross black leather t-shirts, vests and trousers in a black and red and black and blue combination with words such as ‘SIXTEEN’ and ‘HIGH VOLTAGE’, some with parachute capes attached, were a nod to youth and biker culture. 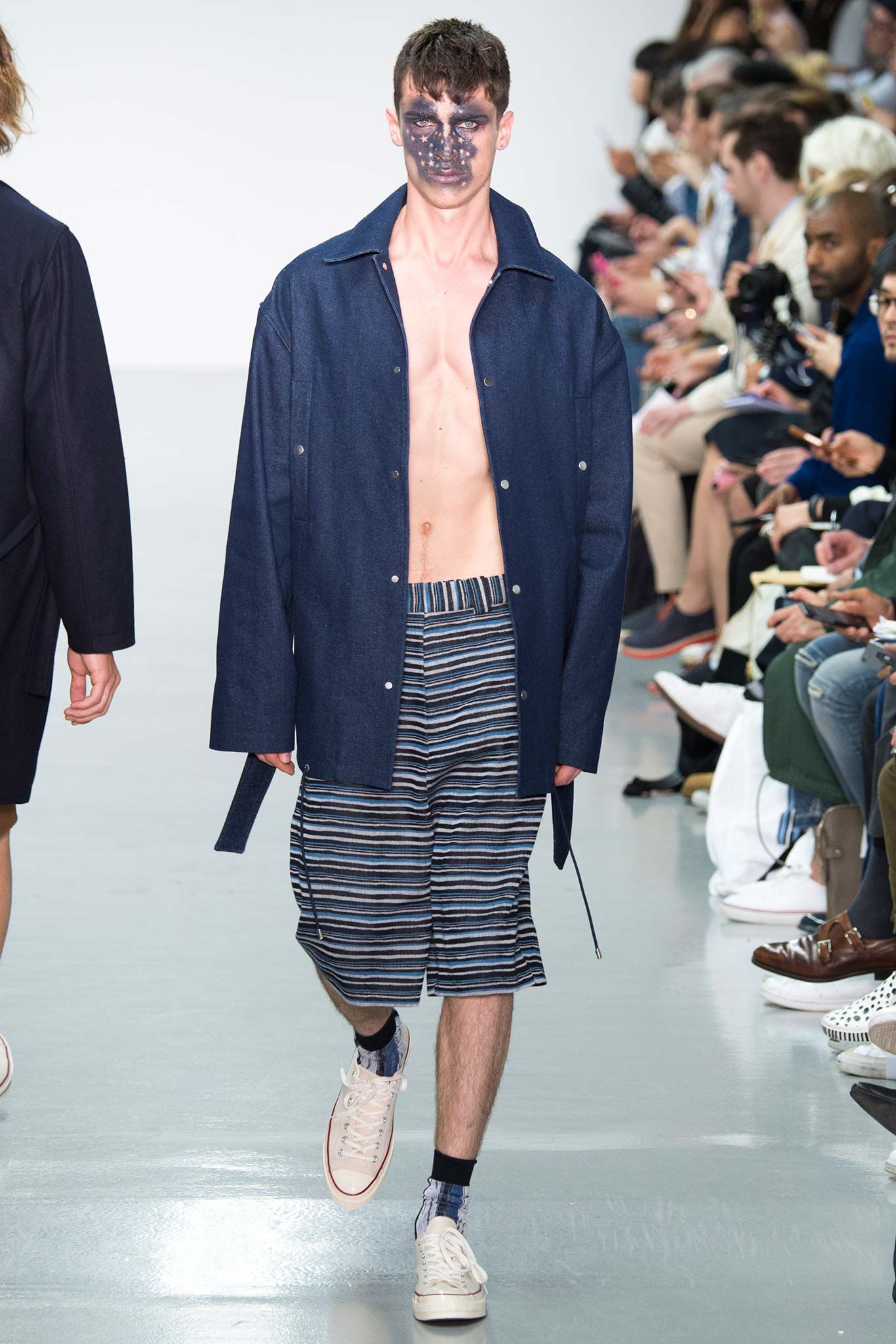 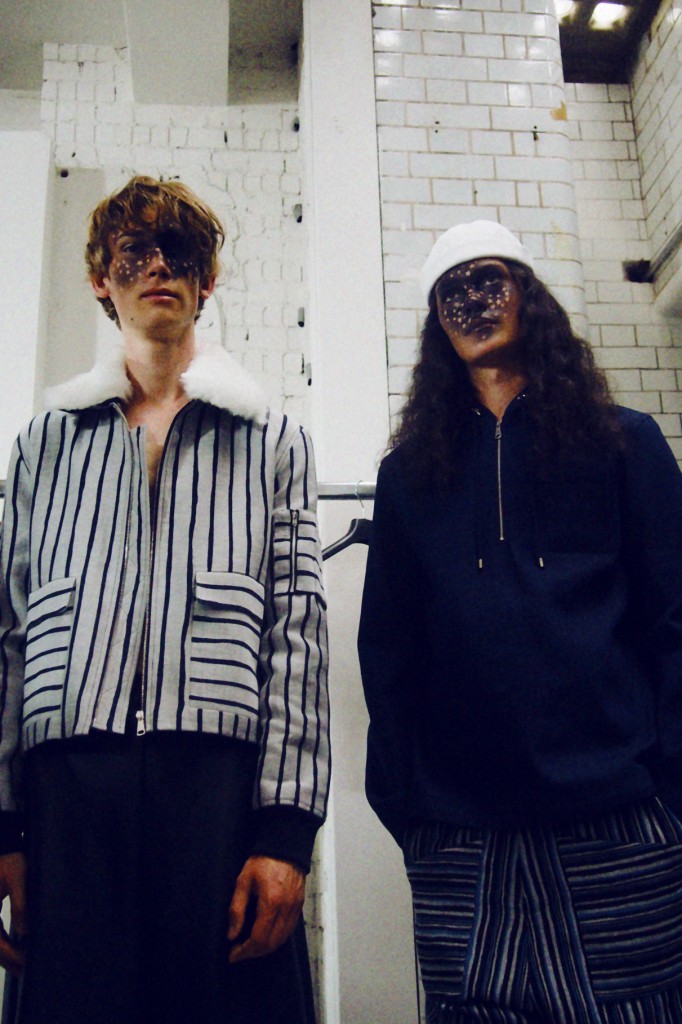 The graphic and bold use of lines and strips at Agi & Sam added innocence, naivety and vulnerability to a palette cleansing and structural collection. Inspired by the idea of maturity, a yearning to return to their younger childhood years and the fear of monsters and things that go bump in the night. Models with stars stencilled on their eye lids wore striped pyjamas in a palette of navy, white and black. Known for their bold and colourful prints and now veterans on the London fashion scene, Agi & Sam are going through the process of maturing and nurturing their brand and their customer. In the words of 1 Corinthians 13:11 ‘When I was a child, I talked like a child, I understood as a child, I thought as a child: but when I became a man, I put away childish things.’

This level of maturity and nurturing sums up the overall mood of LC:M that after 4 years has matured from infancy to a global phenomenon that will keep on growing. 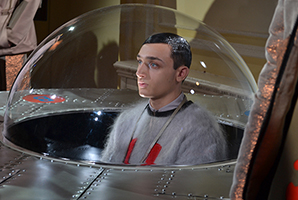 London Collections Men kicked off yesterday, with amongst others Topman’s ode to the Globetrotter. 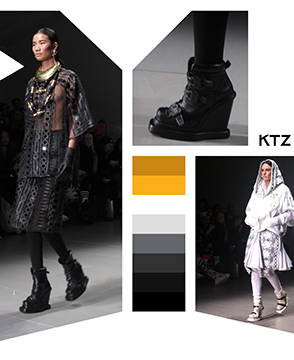 London is known for its innovative and creative Fashion Week. People from all aspects of the industry come to London, to be inspired by new upcoming talent. Somerset House was awash with fashionable people, photographers and security. Everywhere you looked, people were dressed fabulously. Some to strut their stuff for the cameras, some running […]