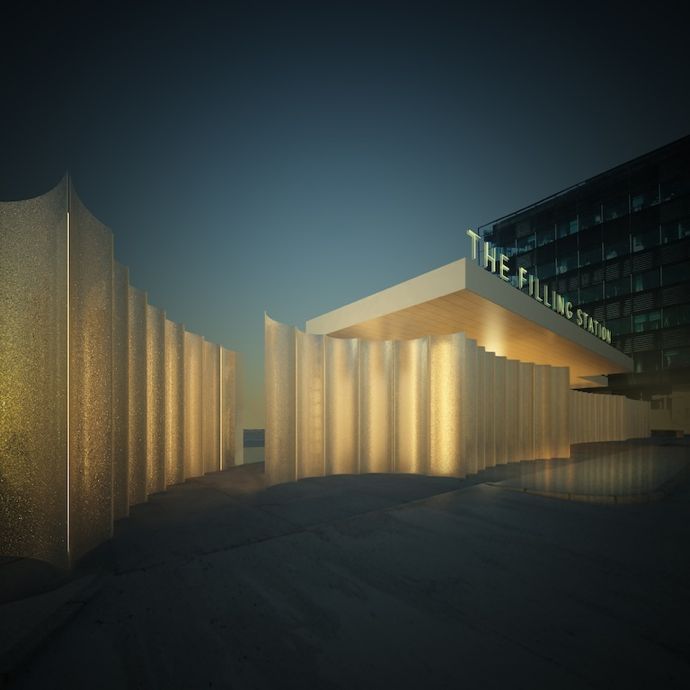 Despite the recession, London’s tough as anything. We don’t cower or clutch our communal heads in despair (oh, all right, we probably still do that, but only in private); lack of money, time, fresh air just makes us more creative, showing a hothouse of inspiration, talent and unusual solutions to projects.

Take the latest kid on the block, the King’s Cross Filling Station. King’s Cross has been dragged kicking and screaming from being a sort of sooty, bedraggled satanic mill of a train station, surrounded by human waifs and strays peddling themselves and any class A drug going while adrift in a roiling sea of those familiar bruiseblue cans of Tennant’s Extra Strength and White Ace extra strength cider (or anything else that combines the words ‘extra strength’ with ‘special offer’) to an area of wonder, somewhere you actually want to go to both before and after dark.

The ‘new’ shiny King’s Cross is clearly flourishing – after four years of investment in the 67-acre development it re-opened in September 2011; around a third of the 8 million sq ft has been taken through nine significant agreements. In total, the King’s Cross Central Limited Partnership project is delivering up to 2,000 new homes, 3.4m sq ft net of office space and 5000,000 sq ft of retail space. There will be 20 new streets, 10 major public spaces and 20 historic buildings and structures are being restored and refurbished across the site. Well done, guys. Spaces such as the refurbished St Pancras Station which is just wondrous; I’m sure the 5,000 staff and students of Central Saint Martins College of Art and Design who started term at King’s Cross in September 2011 are loving their new space after the cramped buildings on Charing Cross Road and Holborn, however steeped in history they were. The Great Northern Hotel (which formerly looked like the epitome of a down-on-his-luck, travelling salesman’s hang out) is reopening as a boutique hotel in early 2013… I could go on.

Having set out to create a strong identity in an area of central London that is bravely going through such great change, King’s Cross has been working with Carmody Groarke, one of London’s most exciting young architecture firms, on their latest project at the 67-acre development. The result is architecture used as means of drawing people in which has been created for the King’s Cross Filling Station, previously a disused petrol station on a part of the site adjacent to York Way and the Regent’s Canal.

A robust concept has been developed by Office of Change, Pablo Flack’s consultancy, which sees the King’s Cross Filling Station encompassing a semi-permanent structure, a restaurant and social space, and an engaging cultural arts programme, cleverly re-using the existing building and canopy forecourt. The restaurant is set to open 24 May, and the forecourt in mid-June, while the cultural arts programme will start towards the end of June.

As you can see from the images, a golden, slightly sparkling 200m long x 4m high transparent and curvaceous fibre glass enclosure screens the King’s Cross Filling Station from the busy road along York Way, where sweeping curved walls create both a warm sensuousness and a sequence of spaces leading to the canal-side. This enclosure will not just lend definition to the rooms both inside and out, the fibreglass walls will also be illuminated from behind at night, and thus create an Edward Hopper-esque, filling-station-on-the-moon quality. Wow! By day sunlight will shine through the translucent screens forming shadows that partly reveal the activity concealed behind, encouraging a sense of curiosity and desire to join in.

Viewed from all sides, the main enclosure defines a large hall-like space beneath the station canopy overlooking the canal. The design is not so much about maximising the area, rather to create spaces that are more attractive and comfortable to guests in relation to the views and in the context of the site. The existing canopy from the disused petrol station forecourt cleverly creates a covered outside space that extends the possibilities of the restaurant and planned cultural programming.

Best of all, as we humans are so notoriously fickle in our affections and inevitably, what is hot today will soon be yesterday’s news, this is a semi-permanent building. After two years, new homes will be built on the site as part of the King’s Cross development. The issue of life span has influenced the way in which Carmody Groarke have approached the build; reusing the existing canopy, shop and site services is critical to its viability. The structure for the enclosure is constructed from scaffolding and fibreglass cladding modules that can be recycled at the end of the project.

Carmody Groarke are also transforming the existing petrol station kiosk, into a new restaurant, Shrimpy’s, (run by the Bistroteque boys so yummy food assured) which will have 50 covers, and is arranged around a kitchen, and central bar and dining area. There is no doubt this project brings a new social and cultural venue to King’s Cross overlooking the Regent’s Canal.

Kevin Carmody of Carmody Groarke says of their latest project: ‘Through creative re-use and adaptation of the existing canal-side structures, we have set out to create a strong ‘sense of place’ for this part of King’s Cross, with the installation of semi-permanent architectural interventions, allowing the site to transform into a destination for cultural events and a unique dining experience.’ 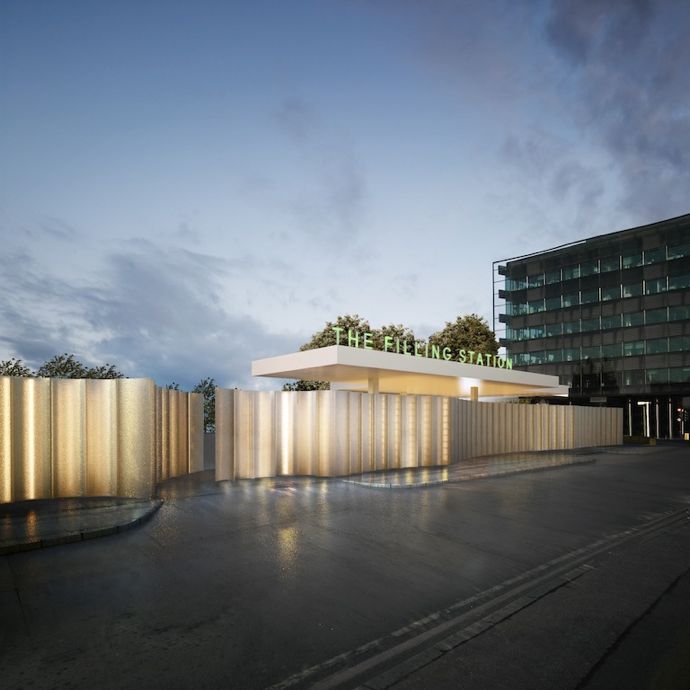 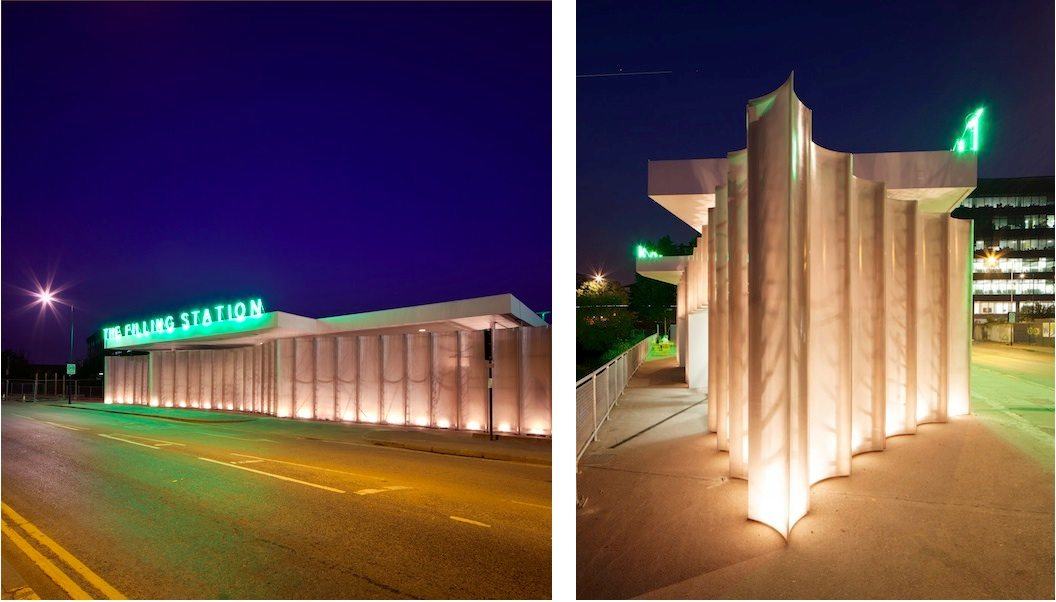 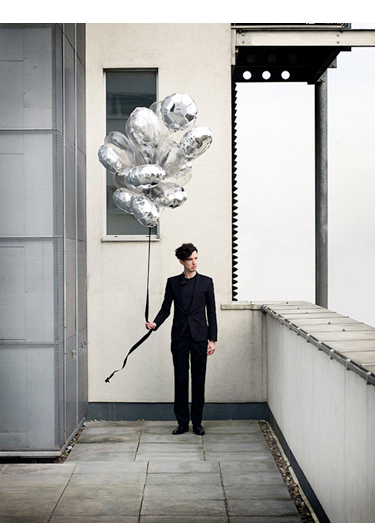 Art Director Phillip Cooper is known for his wide range of collaborations and diverse work ranging from small scale designs to large installations. His avant-garde approach always gives projects an interesting twist, which make Phillip Cooper an artist to remember. His previous collaborations have included Selfridges, V&A and Dover Street Market. His latest project will […] 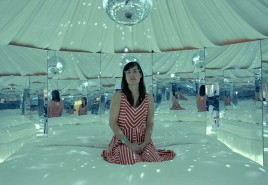 In the summer of 2013, a train designed as a kinetic light sculpture by artist Doug Aitkin travelled from NYC to San Francisco over 24 days. Visiting ten stations en route, the train set in motion a series of happenings, each site-specific and unique to the creative participants. In the UK and Europe we […]