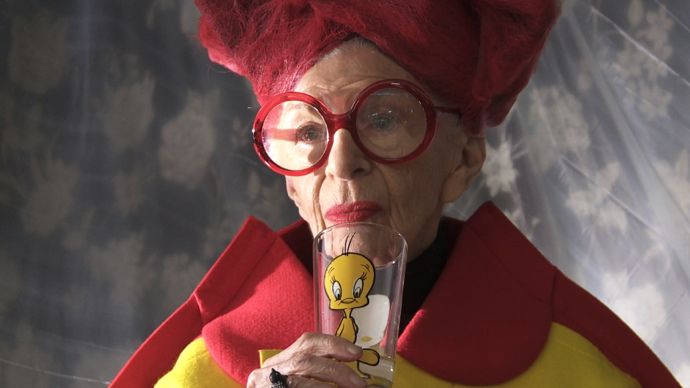 Any lover of the iconic film Grey Gardens will recognise the now sadly late Albert Maysles’ name. This renowned filmmaker’s last work was IRIS, a must-see documentary about accessories legend and radical spec wearer Iris Apfel. Don’t be fooled by the clanking bracelets and clashing patterns – there is so much more to Apfel than her deft ways with colours. A typical swan (effortlessly gliding on the surface while feet are furiously kicking away), she makes it look like it all happens by accident but make no mistake – this woman has been a grafter all her life and is still working at the age of 93. She is not a fan of the internet – despite being the star of internet blogs such as Advanced Style – she feels that not only are we too dependent on the digital world but also spend far too much time staring at our mobiles to the exclusion of actually, you know, TALKING to each other. 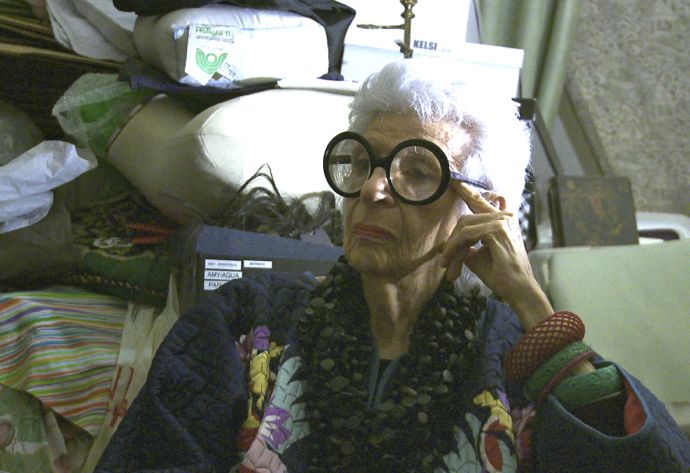 When she was starting out in fashion, a department store owner told her: “You’re not pretty and you’ll never be pretty, but it doesn’t matter. You have something much better. You have style.” Apfel still prefers to be happy rather than well-dressed, despite always looking eye-catching. She has long been admired for her very original look — while other women would let designers and the media tell them what to wear, Apfel would combine haute couture tops with pants fashioned from church vestments and tribal jewelry. She mixed designer pieces with flea market finds, transforming dressing to an improvised artistic expression. 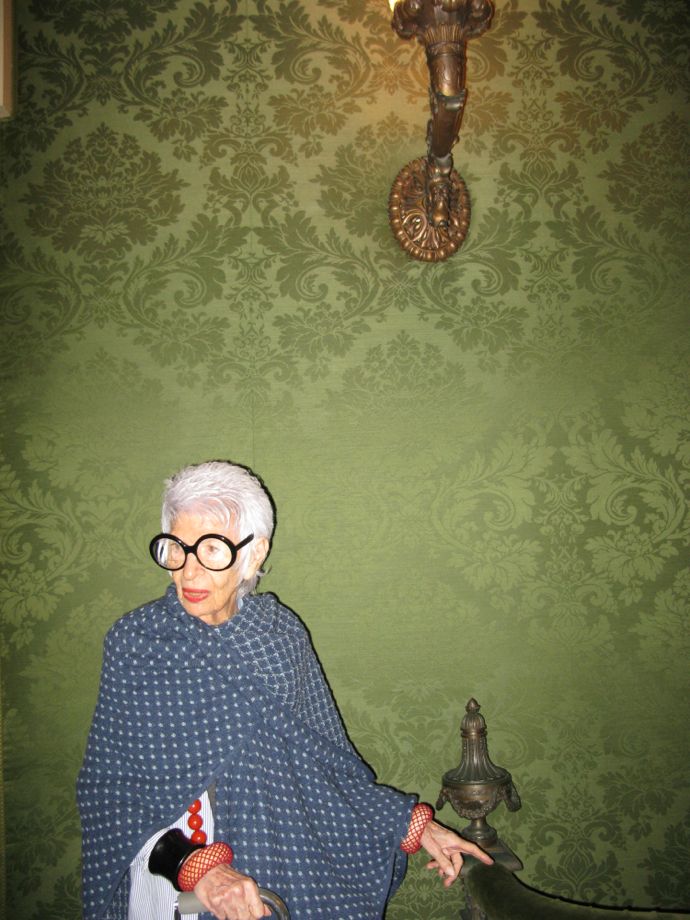 More than a fashion film, IRIS is a story about creativity and how, even in Apfel’s later years, a determinedly free spirit continues to inspire. The documentary portrays a unique soul whose enthusiasm for fashion, art and people are her life’s sustenance and reminds us that dressing, and indeed life, can be what you decide it should be. Despite the abundance of glamour in her current life, she continues to embrace the values and work ethic established during a middle-class Queens upbringing during the Great Depression. “I feel lucky to be working. If you’re lucky enough to do something you love, everything else follows.” As you have heard often enough, do a job you love and you’ll never work a day in your life.

Apfel’s background was always design-orientated. After studying Fine Arts at New York University, Apfel’s first full-time job was at Women’s Wear Daily, eventually going on to apprentice with interior designer Elinor Johnson, and then beginning her own interior design business. In 1948, she married Carl Apfel, an advertising executive, and together they founded Old World Weavers, manufacturing fabrics Apfel imagined but could not find anywhere for her many design projects. From 1948 until 1992, Carl and Iris helped restore the fabrics of most major museum collections, including the Metropolitan Museum of Art, as well as the White House. Their travels all over the world turned Iris Apfel into a dogged collector of textiles she transformed into clothing, and artifacts she turned into jewelry. She is basically a hoarder albeit a very neat one – their flats in New York and Miami are essentially museum spaces full of collections of unusual vintage finds mixed with naïve art.

In 2005, the Metropolitan Museum approached Iris about sharing her collections. The show, Iris Apfel, Rare Bird Of Fashion, showcasing Apfel’s irreverent style, became a runaway hit and travelled the country making Apfel, at age of 87, a self-described “geriatric starlet.” Apfel’s obvious appeal landed her on the pages of publications as diverse as European editions of Vogue and Harper’s Bazaar as well as PAPER and Dazed and Confused. Along the way, she became a favorite model of Bruce Weber. She’s appeared in a Coach ads, designed a sell-out line for MAC Cosmetics and now sells clothing and accessories on HSN, an American shopping channel. She is a visiting professor of School of Human Ecology at The University of Texas, where selected students join her annually for a weeklong tour of the fashion industry that involves every aspect of the business. 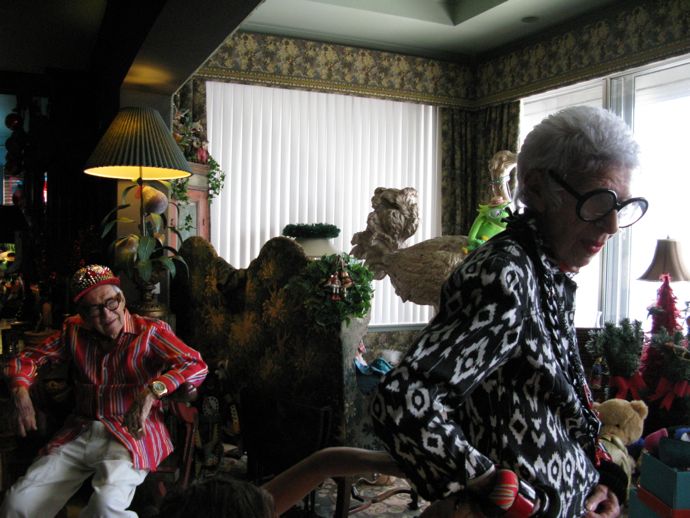 The documentary is not afraid to discreetly touch on the sadder aspects of her life – a broken hip is mentioned off-handedly (but in true Apfel style, waved off as nothing); her husband’s deteriorating health is observed; her obvious heartache when she has to start selling some of her treasured mementoes from long kept in a storage facility. Apfel has not forgotten the circumstances of acquiring them; stories that are all the more bitter-sweet for being from a different time, one where she and Carl were young, busy with a life traveling and working together. 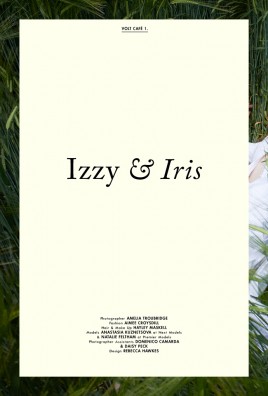 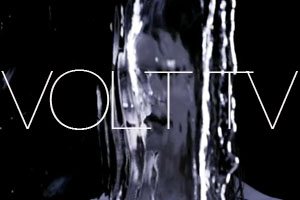 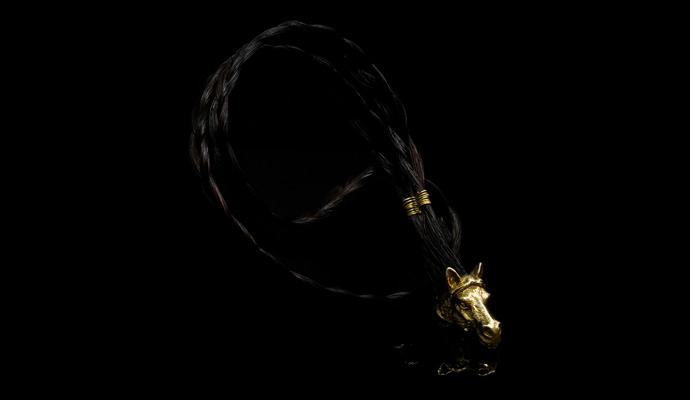 RCA Graduate Tomasz Donicik speaks to Volt Cafe about designing men's jewelry, his inspiration and what is currently rocking his world.