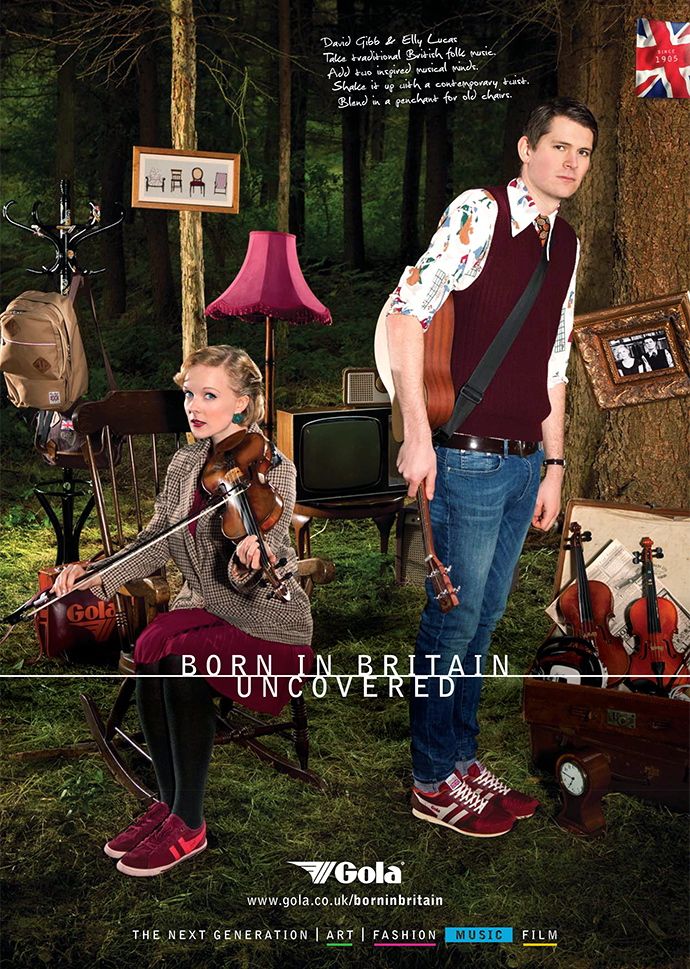 With its latest idea – trawling through universities across the UK to recruit the brightest and most talented students to act as brand ambassadors – British heritage brand Gola shows yet again why it has endeared itself so to the legions of fans.

Gola’s history is one of a uniquely British brand, born of humble beginnings in a small workshop in Leicester in 1905, which has earned itself a well-deserved place in the nation’s heart. It also has a long established history of producing merchandise for all kinds of sports. In the football-obsessed UK, the name Gola (an anagram of ‘goal’) is very special. In the 1960’s Gola became the pre-eminent sportswear brand, and was affiliated with the best sports of the time such as boxing, rugby, tennis, and squash. During the brands heyday in the 60’s and 70’s, Gola was linked to some of the biggest sports stars of the era including the likes of football star Bill Shankly, long distance runner David Bedford and the legend that is strongman and athlete Geoff Capes. The iconic sports shoe company earned a permanent place in UK footwear history when the Liverpool team wore Gola boots for their 1965 victory at the Football Association Challenge Cup. And not just sport – Gola’s proud history includes supplying the British Army with boots during WWII. The epitome of true British grit, Gola’s unique and fascinating story saw the brand conquer various trials and tribulations to become the number one British sportswear brand of the day in the ‘60s and ‘70s. Like its shoes, the brand’s collection of bags, belts and hats embody an aesthetic that effortlessly blends British sophistication and football chic.

The key to Gola’s success is their awareness of their past and their hope for the future, merging what works from their beginnings and incorporating it with the latest technologies and advances in shoe design.

30 students, which were chosen from a variety of courses including music, fashion, art and media, have been acting as advocates for Gola in an official capacity since April 2013. Where this could have been potentially fatal, these selected opinion formers turn out to be on point, 30 very different voices that are clearly socially aware, creative and super curious about the diverse world we live in. Reading through their bios and their blog entries, you actually feel alternately humbled – they are clearly very bright – and fizzing with excitement at discovering the various artists and creatives they’re generously sharing with you. Given creative freedom to generate talking points for the brand, the students will be tasked with promoting Gola in and around their respective campus’ as well as online across Gola’s social media platforms.

Gola Classics is using this ingenious Student Ambassador project as a driver for the brand’s 2013 ad campaign. Under the tagline ‘Born in Britain: Uncovered’ the new campaign will feature the best up and coming talent that Britain has to offer from the worlds of music, art, fashion and film; talent which have been identified and chosen by the student ambassadors. This will also reinforce Gola’s British heritage. The whole idea is so encouraging and heartening – a great example of a brand supporting and motivating art, innovation and creativity.

The first of many executions features David Gibb and Elly Lucas; an up and coming folk duo from Derbyshire, who make Anglo Saxon inspired folk music and take inspiration from the natural world around them. Sounds like a lovely juxtaposition to some of the more hardcore tunes currently dominating the charts. Quirky and very British, they have a weakness for old rocking chairs (bless! Guys, I love you already!) and David is an avid collector of retro televisions… 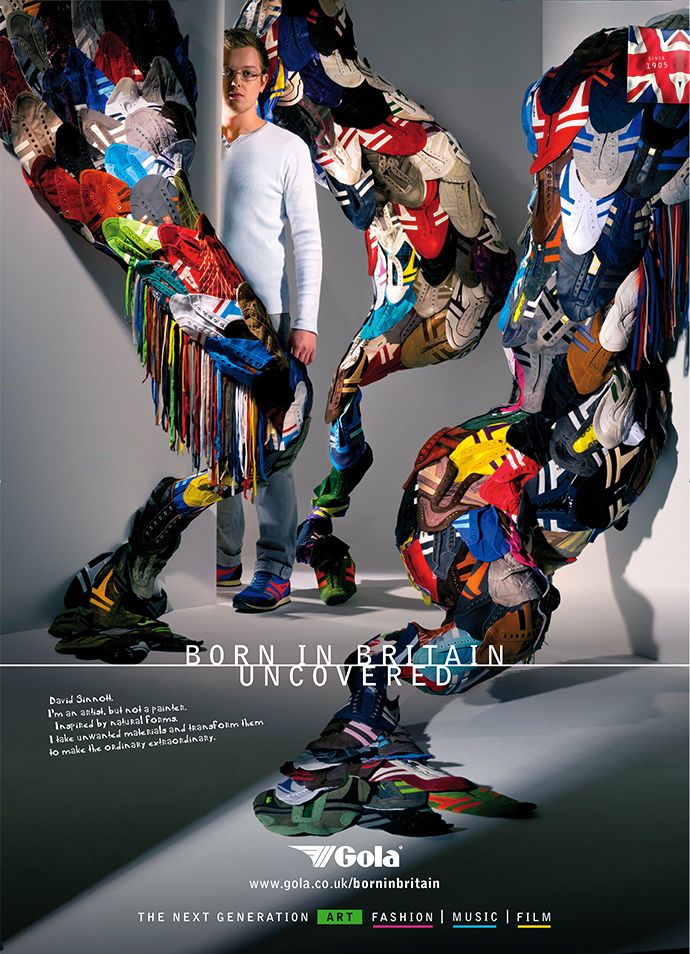 The second execution features talented Fine Art student David Sinnott; David makes whimsical and very imaginative sculptures out of recycled clothing, toys and utensils. For Gola he has created an abstract and engaging 3D sculpture made entirely from recycled trainers to showcase his unique talent.

To further check out all things Gola (like the Liberty print trainers or the Gola Colours, just the thing to cheer you up on a gloomy day), try their Pinterest page, go on to their Face Book page or the Gola Twitter page. 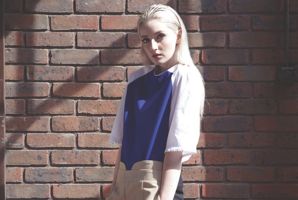 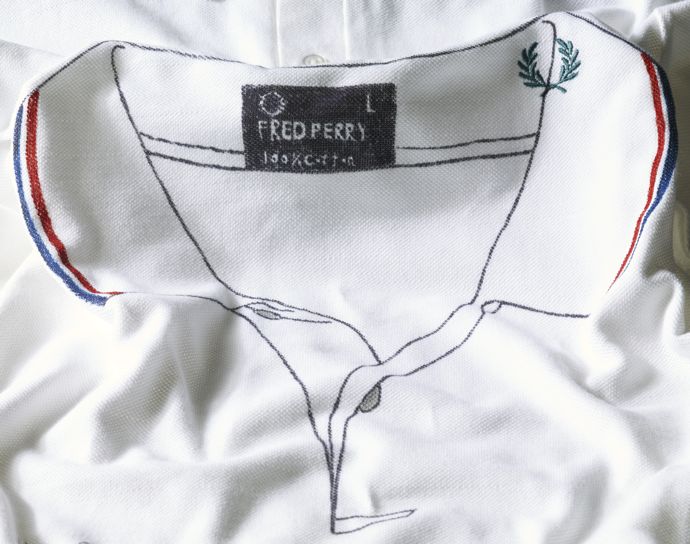 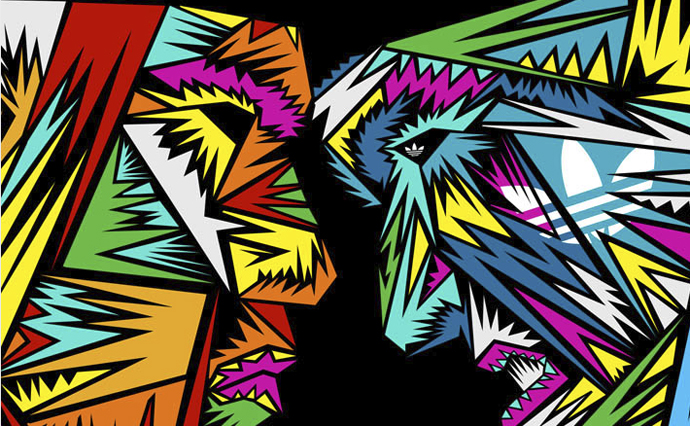