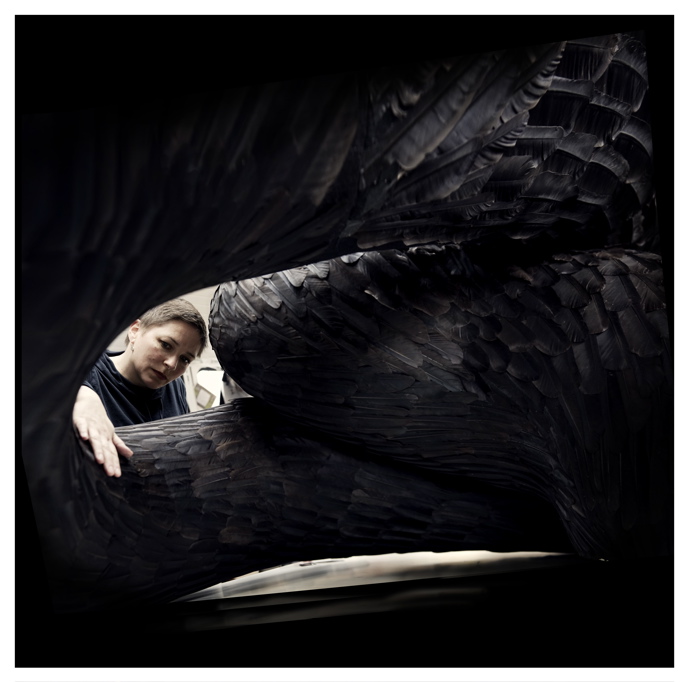 Artists Alice Anderson and Kate McGwire have been commissioned to create enormous artworks for All Visual Arts, a new and exciting gallery space in King’s Cross.

Alice Anderson has already established an amazing reputation with shows in Paris, New York and currently at the Royal Opera House. Her work involves site specific installations of human hair, often spilling out into spaces. For the show at All Visual Arts she has created ‘Fort-Da‘, a massive bobbin of dolls’ hair some 4 metres high.

Kate MccGwire’s work, ‘Corvid‘, is made up of crow’s feathers and will be a site specific four metre wide mass of coiling feathers.

Bound features these two monumental sculptures, one by each artist. Where Anderson’s ‘Fort-Da‘ is reminiscent and autobiographical, MccGwire’s ‘Corvid‘ is the contrary, instinctual and phenomenological.  Their immense scale makes the viewer feel tiny, recalling the powerful awe and fear experienced in childhood.

‘Fort-Da’ is a bobbin, several metres in height, with ropes of red dolls hair bound around it. For Anderson, the hair represents the link between the self and other, focusing on the artist’s relationship with her mother. The bobbin thus becomes an emblem of her mother’s absence.

‘Fort-Da’ refers to a game invented by Sigmund Freud’s one year-old grandson. The infant would throw a wooden reel attached to a piece of string over his cot and then retrieve it, a gesture he would repeat compulsively. Freud understood the child to be saying ‘Fort’ and ‘Da’ (meaning ‘gone’ and ‘there’ in German), theorizing that the game allowed the boy to adapt to the anxiety caused by his mother not being present.

The game parallels one Anderson resorted to in her own childhood. In her version, the wound hair tightly bonded to the bobbin, becomes symbolic for her attachment to her mother, and the compulsive act of winding the hair, a way of adapting to the angst caused by her mother being away.

‘I remember the terrible fears I used to have as a child left alone at home for many long hours waiting for the return of my mother. At that time I invented rituals for myself to calm my anxieties. These rituals consisted of undoing the thread from seams, which I would wind around parts of my body and other objects. This obsession became so bad that I started to do the same thing using my hair. I guess it was a way of connecting my body to the world.’

Anderson’s ambiguous relationship to the maternal – both protective and oppressive – incites a sensation of anxiety that is echoed by the ambiguous nature of MccGwire’s ‘Corvid’.  Like a twisted mass of feathered rope lying discarded in a heap, we cannot be certain if this coiled body, that triggers deep primordial fears, will threateningly spring to life. ‘Corvid’ is a writhing, serpentine formation made up of crow’s feathers, a bird traditionally associated with the supernatural and with pagan superstitions. By using archaic forms and materials that suggest anthropomorphic associations, MccGwire triggers dormant primal forces.

MccGwire use of feathers imbues her work with anthropomorphic characteristics. She first started working with pigeon feathers in 2007 and has progressed to using the plumage of mallard, magpie and crows, each which carry the cultural connotations we attach to different birds. The pigeon is regarded as ‘a rat with wings’, the magpie a thief, the crow a deviant bearer of bad news.

The crows’ feathers used in ‘Corvid’ were sent to her by gamekeepers and farmers who shoot the birds to stop them damaging crops and fledgling birds (one theory is that crows are contributing to a decline in the songbird population, and crows are now being systematically culled to test this idea).

‘Corvid’s’ form is muscular and tensile, as if it has the power to restrain. Without beginning or end, its form is like the pattern of thought, endlessly repeating and turning in on itself, never coming to any kind of conclusion. This endless repetition also appears in Anderson’s ‘Fort-Da’ in the implied action of compulsively winding of doll’s hair to the bobbin as a strategy to ease the anxiety of separation. 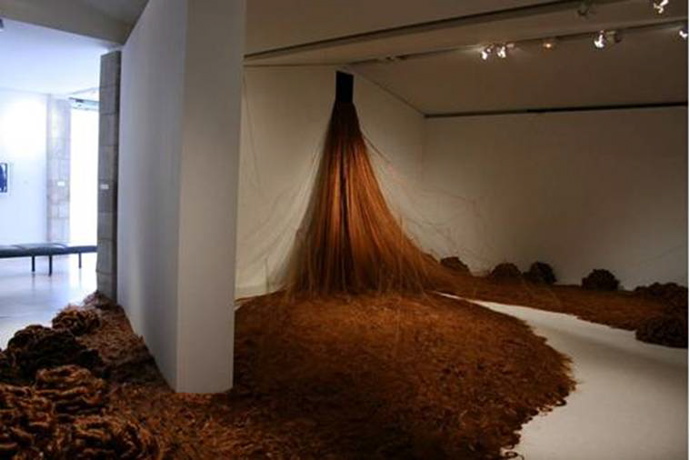 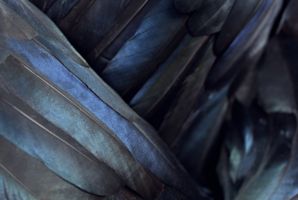 LURE by Kate MccGwire at the AVA gallery is on till the 26th January 2013. This first solo exhibition with AVA will feature her largest site-specific installation to date 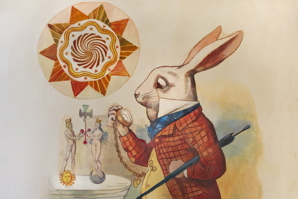 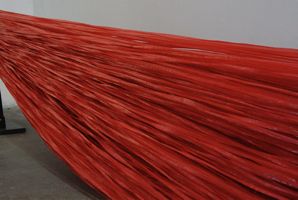