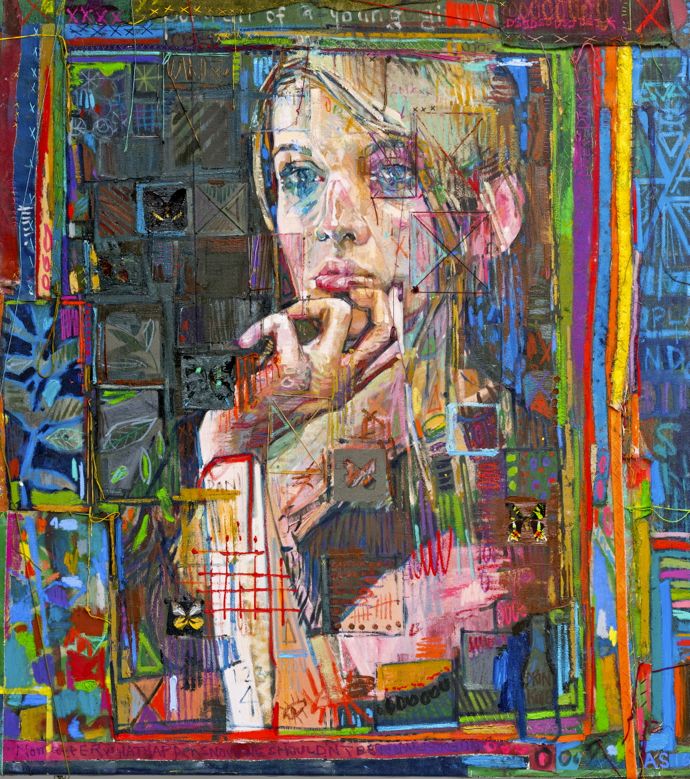 Andrew Salgado’s The Snake at Beers London is his most confident work to date. Salgado was the victim of a gay hate crime in Canada and deals with ‘otherness’ and victimisation in his work. This might sound bleak, yet his work is very chromatic and uplifting. The title of the show refers both to his own sense of re-birth as well as its allegorical nature, and healing has been one of the defining themes of his work. For his private view, he is transforming the traditional white cube gallery space into a the Garden of Eden, with walls painted green, a carpet of grass and over 250 butterflies. 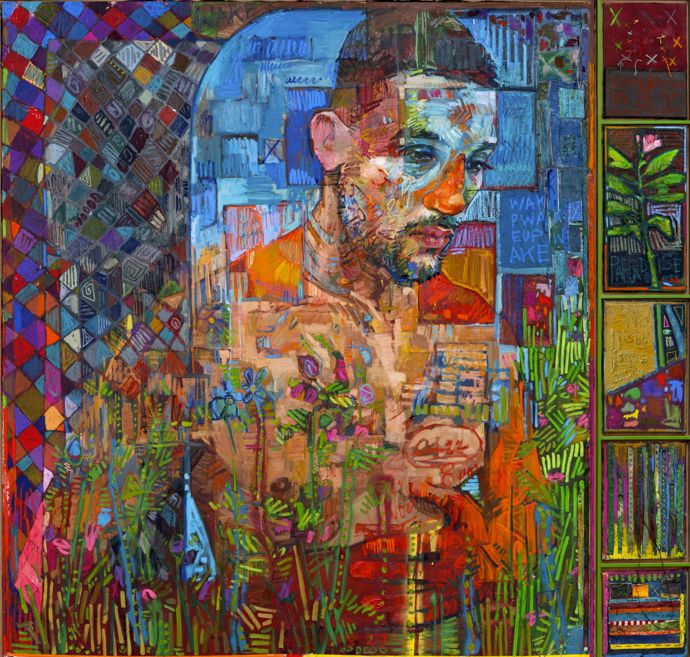 Salgado will exhibit 12 vibrant works as a tribute to the victims of the recent Orlando massacre in Florida, which killed 49 people, making it the largest shooting by a single gunman in American history. As a gay man who subscribes to Francis Bacon’s dictum that it’s not the paintings that are violent, but the world itself, Salgado finds himself once again revisiting themes of brutality and masculinity. Recognisable for his somewhat aggressive, textured brushstrokes and the raw emotion that bleeds from his works, Salgado’s paintings often reference broad ideas around hatred, destruction and re-birth. Previous subjects have included serial killer Jeffrey Dahmer, homosexual serial killler as well victims who have had experienced bloodshed and suffering, including Salgado himself. 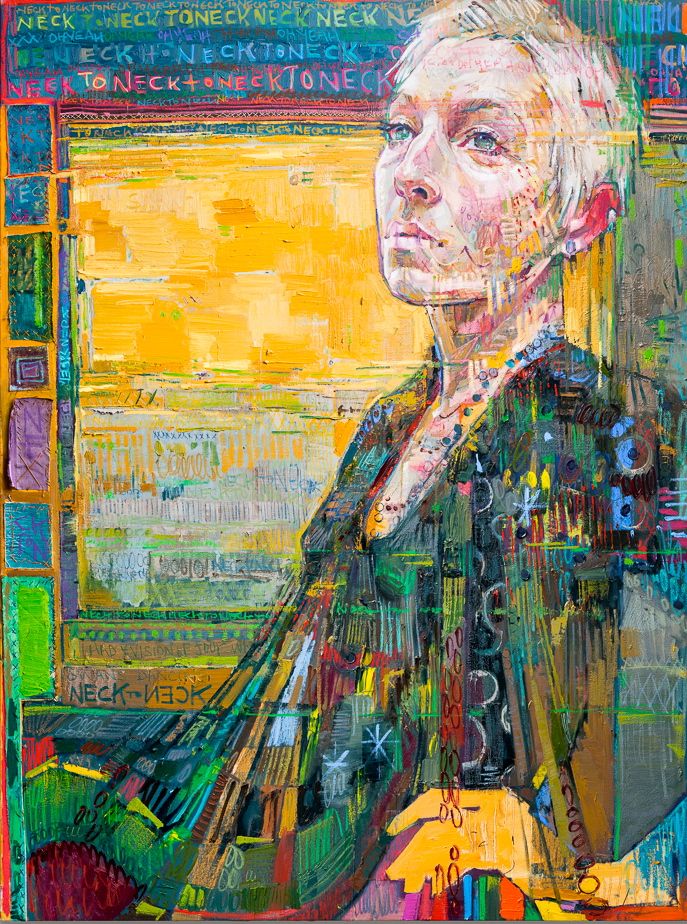 Salgado claims that there’s a heart of darkness to the works which isn’t immediately obvious. He says, “I want people to feel like they’re walking into a clandestine space. There’s something evil and seductive about the show as a whole. I feel that as a gay man, we’re pariahs who have been cast out of the Garden of Eden.”

The immersive show will present a paradox of the sacred and the profane, with man’s inhumanity to fellow mankind as the recurring vision. “Orlando was what spurred me on to looking at the ills around the world”, says Salgado. “We’re waking up every morning to more race-related attacks and assaults based on sexual or religious preferences. We seem to have reached a new low and it just seems to keep going, like we’re trapped in some horrific echo chamber.”

This became the title of one of the works. Echo Chamber features a portrait of Sandro Kopp, artist and partner of Tilda Swinton. Yet although the subject matter is dark, the paintings themselves are seductively dizzying, their bold colour palette and brushstrokes reverberate, each painting resonating with its own murky depth. 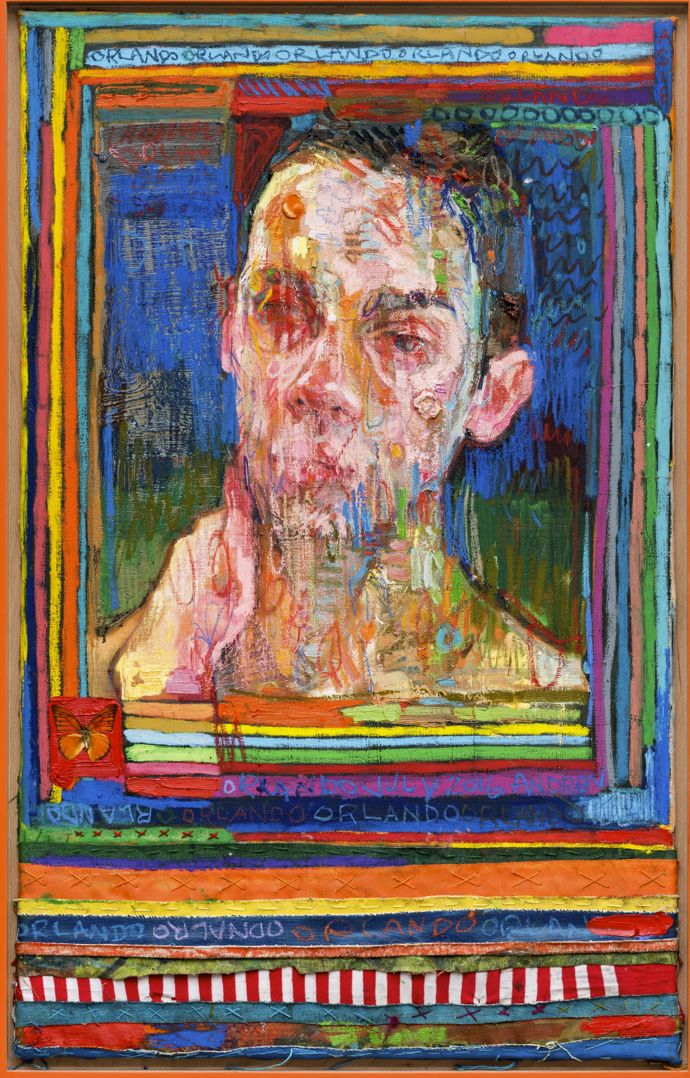 Many of the subjects represent outsiders and are painted on canvasses which have been and stitched and hand dyed by the artist. Female subjects figure will figure strongly in the show, with completed works to include Fiddle and Drum, (named after the Joni Mitchell anti-war song) and Swans, depicting an older woman with shortwhite hair and extremely pale skin, to whom Salgado was drawn by her ethereal and ‘serpentine’ qualities.

Additional female subjects include model Anna Cleveland and her supermodel mother, Pat Cleveland. The Festival in Hell is borrowed from a lyric in a Tori Amos song. The painting is a disturbing vision, a manifestation of the devil, sitting in possibly regretful contemplation of his own reign of destruction. He has given us the powers to ruin ourselves and humanity but even he is shocked at at our brutal nihilism. 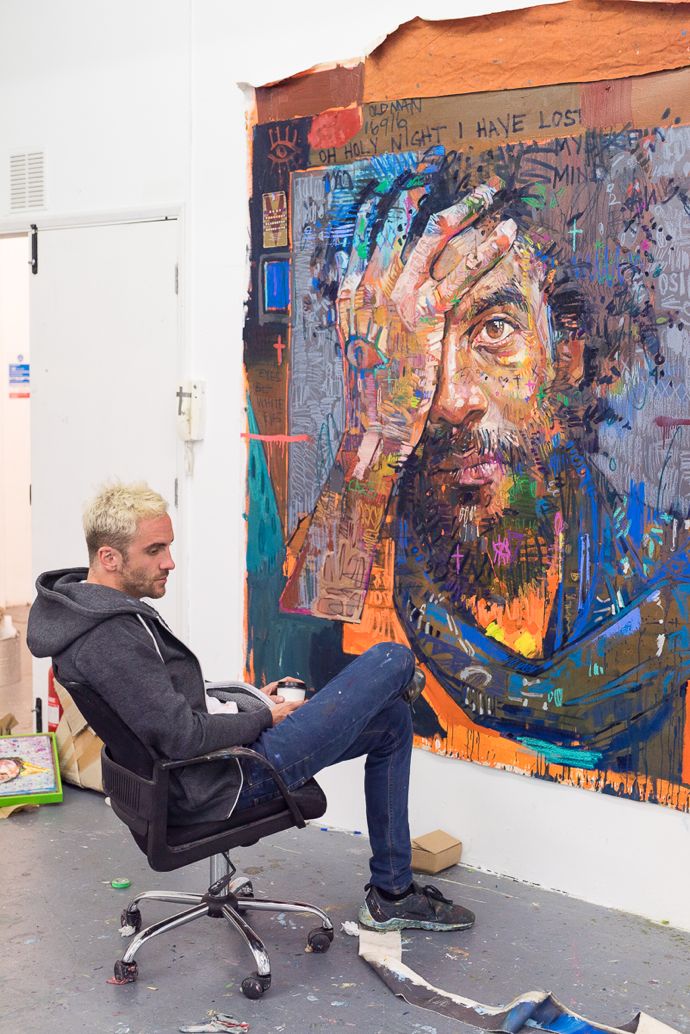 ANDREW SALGADO (b.1982, Canada) is one of the eminent emerging painters in both the UK and North America. He has been listed by Saatchi as “one to invest in today” (Sept 2013), lauded by esteemed critic Edward Lucie Smith as a “dazzlingly skillful advocate” for painting, and labeled a “rising star” by London’s Evening Standard (Aug 2015). Previous solo exhibitions include This Is Not The Way To Disneyland, (Beers at Volta Basel, 2015); Storytelling, Beers London (2014); Variations on A Theme, One Art Space, New York City, (2014); Enjoy the Silence, Christopher Møller, Cape Town (2014); Salgado has lived and worked in London, UK since 2008. 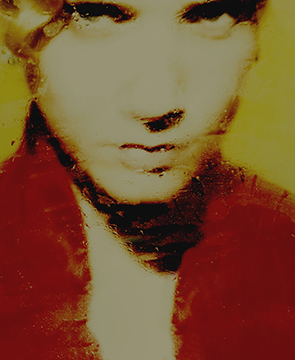 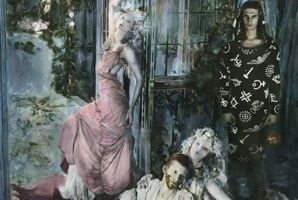 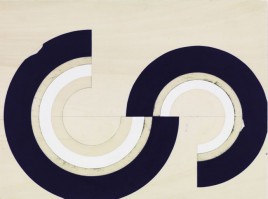 For Berlin-based artist Jens Wolf, his first ever UK solo exhibition is an important one. As one of the key figures in the development of process art, he has taken inspiration from the abstract movements of the 20th century and mixed them together with familiar motifs to creating striking, but simplistic and repetitive geometric paintings […]