Whilst vampire films don’t normally get the best rap nowadays, A Girl Walks Home Alone At Night is no ordinary vampire love epic. Set in the fictional Iranian ghost town of Bad City, this Spaghetti Western-style, unusual love story directed by Ana Lily Amirpour (who used her own graphic novel as a starting point), gives you faith that although the world can seem like a bad place, there is hope to be found.

With all dialogue in Iranian (with English subtitles), a mysterious and initially threatening female vampire stalks the people of the town, frightening children and playing havoc with their minds. Played by Sheila Vand, the girl, very like a caped bandit, circles the town for her victims, until she finds one she doesn’t actually want to consume. Almost like an Iranian James Dean and Marlon Brando fusion, Arash (played by Arash Marandi) draws her out of her deathly vision.

Sound tracked by a mixture of Iranian rock and techno with Morricone-inspired riffs, this black-and-white-aesthetic Iranian vampire western displays an amalgamation of inspirations from graphic novels, horror films, Iranian New Wave and the traditional spaghetti western. With David Lynch-like surrealisms and a Sergio Leane-type tension, Amirpour takes popular influences and creates a world which is entirely her own. Her use of zoom and focus draws the characters out of their shells and makes them feel like you know them already. Helping this is the inspiration from pop icons that Amirpour drew when creating the characters; James Dean, Sophia Loren and Ninja from Die Antwood were all deconstructed into characters in A Girl Walks Home Alone At Night.

Home to sordid souls, reeking of death and despair, a lonely vampire stalking the town’s unsavoury inhabitants; at first seeming like the entirety will be a tale of gloom and death, it shows even a vampire can feel love. 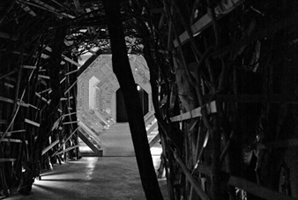